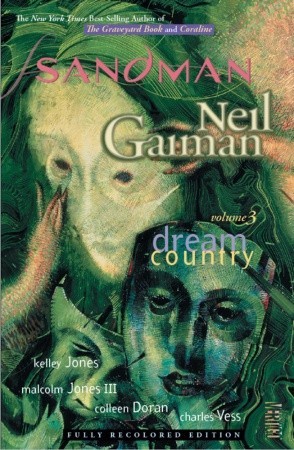 
Happy Throwback Thursday, everyone. This week I continued reading The Sandman series, written by Neil Gaiman. This is an excellent horror graphic novel series, perfect to read around Halloween that everyone should read.

For anyone unfamiliar with the series, or if you’d like to catch up on our reviews, check out the reviews of Preludes and Nocturns (Volume 1) and The Doll’s House (Volume 2).

Dream Country (Volume 3) of the The Sandman series reads more like a compilation of short stories as opposed to the previous volumes in the series. The volume is separated into three different stories. One is about a Here again Dream takes somewhat of a back seat. Dream’s presence is obvious, and very much felt in each tale. Yet, he is not necessarily the main character of each tale. He is the catalyst, the important factor, the other, at times.

This is quite an interesting method of storytelling, and I think it works well for the series. We see Dream from the perspective of an outsider at times, as opposed to having scenes drawn from his perspective.

While this volume was, like those before it, very good overall, I found some of the stories to be a bit less memorable than normal. The first tale was a story about a writer struggling with writers block who holds Calliope, one of the Muses, hostage in return for inspiration. As the mother of his child, Dream ultimately steps in. This is the best of the three stories within this volume. It is graphic, a vivid depiction of someone at the very end of their sanity. We see Dream retaliate with the creative horror he always does.

While reading the volume, I found I liked the second story. I even liked it more so than the third. However, when it came time to sit and write this review, I found I couldn’t remember what the story entailed at all. After a quick read of the synopsis and an aha! moment, the plot returned. The second story is about cats, their treatment at the hands of humans, and the power of dreams to change the world in a literal sense. There is some interesting philosophy in here, and the concept is one I would willingly read about in more detail. But the problem is just that. I didn’t feel like this was a full story for me. It read more like a concept, something that needed a full volume to flesh itself out.

The third tale in particular fell a little bit flat for me. This one centered around William Shakespeare and his play A Midsummer Night’s Dream. The plot of this section has Dream commission the famous play as a gift of sorts, and invites otherworldly creatures to watch. While an intriguing concept and sporting some comical scenes, this story just didn’t resonate very well with me and I found myself skimming through some of the pages. However, unlike the second story, I did remember it. Despite the third tale being a little dull, I have to give it more credit than the second one.

One story deals not with Dream, but his sister, Death. This, along with the first story, was my favorite of the bunch. Death is rather passive in this story, a secondary character just as Dream is treated in the other three. The main character is a woman who encountered an Egyptian god, and her struggles thereafter. Death doesn’t come for her, not as we’ve seen in previous volumes, but happens to hear this woman sobbing as she’s dealing with a death of someone else on a different floor of the apartment complex and simply steps in to see what’s wrong.

The last section is the script Neil Gaiman wrote for the first story complete with notations by him and the artist. Though I didn’t read through this in its entirety, I did skim it. This is an interesting inclusion in the volume a lot of readers would appreciate it. I often find sections like this fascinating. I like seeing how various writers and artists creative processes work. This section is certainly worth at least a flip through, if not a thorough read.

Different in tone and style, Dream Country brings some interesting things to the table. While every story didn’t resonate with me or proved memorable, I did like the volume overall. I think this is worth a read, but, at this point, I’m not positive it’s ultimately necessary to read before delving into volume 4. This feels very standalone in the overall Sandman world. Still, if you can get your hands on it, it’s worth a read.