New Release – It Devours! by Joseph Fink and Jeffrey Cranor 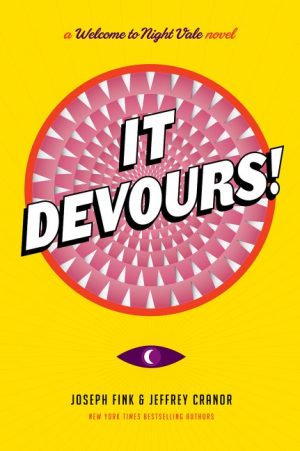 
Welcome to Night Vale, the popular, long running podcast, has just released a second novel, It Devours! written by Joseph Fink and Jeffrey Cranor. This follows last year’s novel titled simply as Welcome to Night Vale. It Devours! is a thriller-esque tale set in the town of Night Vale, a small place somewhere in the mid-west where every conspiracy theory is true, monsters are real, the rules of time-space are more like guidelines, and the citizens take everything in stride, because, to them, it’s all quite normal.

Despite being a tie-in story to an already established world, It Devours is a very easy book to get into. Very little prior information on the Welcome to Night Vale universe is needed to enjoy the story. Though I’ve stated this priorly in regards to the first novel, I feel it is more apt to say in regards to this book. If interested in what we had to say about the first novel you can check out the review here.

The main character of the story is Nilanjana, a scientist working for Carlos in the lab. Strange holes are opening up around Night Vale, swallowing everything and leaving nothing behind. Nilanjana is sent out to investigate and soon finds herself wrapped up in events with The Church of the Smiling God and the wonderful, sweet Daryl, a member of the church. Together they must confront this new threat to Night Vale, stop the massive sinkholes, and the widespread disappearances associated with them.

This set up is perfect. Old fans know exactly where things stand in regards to other in-world happenings, while also managing to be very newcomer friendly. It’s much more ‘real world’ and ‘down to earth’ than the opening pages of the first novel. While explained, I can see some new readers having a ‘this is fun, but what is this’ attitude (and not necessarily in a good way) with the opening chapters of book one. I don’t think that’s the case at all for the second book. Of course the opening chapter doesn’t follow Nilanjana at all, but Larry Leroy, one of the many names mentioned in the podcast but whom little is really known about. In less than ten pages I had learned enough about Larry Leroy to really care about him, and cared deeply about his plight. This story sucked me in from the beginning, capturing me thoroughly.

A great deal of art is included within the book. The Church of the Smiling God hands out pamphlets quite often, something readily seen within the book. Unlike many other stories, these aren’t simply mentioned offhand or described briefly. The pamphlets are all included, a combination of text and wonderfully creepy, unsettling illustrations. The artwork is all by Jessica Hayworth who has done art for Welcome to Night Vale many times in the past. Here, her art shines. The strange, unsettling, sometimes horrifying images painted a very vivid image, and I enjoyed the artistic aspects of the novel quite a bit.

It Devours! is quite an exciting read. I began reading it almost as soon as my copy came in the mail and I didn’t put it down once. There is always something happening, some new information discovered, an enemy that must be confronted, or a problem that needed to be solved. Characters are on their feet and out in the field quite a bit.

This is one major way this book differs from the podcast especially, but the first book as well. Cecil Palmer, narrator of the podcast, is a radio host cloistered in his radio booth. Most of the action during a crisis is from reports, phone calls, and whatever Cecil can see with his own eyes. The first novel, while more directly involved in the action tended to have more of the feel of a science fiction detective novel than anything else. It Devours!, on the other hand, has a very distinct action-y streak. It’s easier to compare it (or parts of it at least) to a thriller novel. The style of the podcast works perfectly for that format, and is, no doubt, one of the reasons why it remains so popular five years on. The more direct, action packed style works just as perfectly for this book. While the podcast, by nature, doesn’t allow for something so thriller-esque, it most certainly fits the Welcome to Night Vale universe well and gives the viewer insight into what is happening all those times we’ve listened to second hand accounts of how Carlos and his team have saved the day.

Despite the shift in tone and perspective, the language and feel of the world remains distinctly Night Vail-ian. The humor is dark, but humorous nonetheless. Truths both unequivocal and disconcerting are touched upon. It’s funny. It’s strange. It’s wonderful. It’s completely engrossing. And I loved every second of it.

As one would probably expect with such a synopsis, Carlos does feature a rather major role within this book. Fans of the podcast rejoice! Carlos is a staple feature of Night Vale, being featured in the first episode of the podcast and having quite a major ongoing role. Despite this, we don’t always see a lot of him, normally hearing about his deeds from Cecil at some point during an episode. Despite all of the on-air time we might have previously seen with Carlos, it is almost always through Cecil’s rose colored glasses in some way.

One of the things I liked the most about this book is that we don’t see Carlos from Cecil’s point of view. We see him from the point of view of an objective narrator, as well as through the eyes of Nilanjana. A great deal is learned about Carlos – things which are never mentioned in the podcast and things he’s not told Cecil. This view of Carlos was quite fascinating, sometimes being in stark contrast to how Cecil speaks of him.

Something I have always greatly admired about the Welcome to Night Vale universe is the care and realistic view which the relationships between characters, romantic or otherwise, are portrayed. It Devours! is no exception to this. The relationship between Nilanjana and Daryl played out perfectly. They were both wonderful characters with a great amount of character development.

One of the major themes in this book is science and religion, their relationship with one another and society. Watching the interactions of Carlos’s lab and the scientists with the Church of the Smiling God and its members was fascinating. This aspect of the book was very good, handled very well, and will, I think, appeal to a very large audience. Interesting questions and ideas are brought up, but neither side is ever condemned or lifted onto a pedestal of its own. Instead, the merits of both science and religion are highlighted, along with one very important lesson – it is how you implement each one into your own life and your community that really counts above all else.

It Devours! is a book that will appeal to a very wide audience. Fans of the show will find a lot to sink their teeth into. While it is probably best if you have some working knowledge as to what Welcome to Night Vale is, I don’t think that a lack of knowledge will hurt. The book never leaves its readers hanging. It doesn’t leave you high and dry. Nor do readers have to necessarily read the first novel in order to enjoy the second. Both are stories set in the same world, but they have very little to no influence on one another. Not interested in or haven’t gotten around to the first Welcome to Night Vale novel? No problem. Just jump right into It Devours!.

I absolutely adored this book. It is a wonderful addition to the world of Welcome to Night Vale. If you are a fan of the show, like books with diverse casts of characters, or are a fan of weird fantasy and science fiction, pick up this book. If you don’t like the podcast this may not be the book you’re looking for.