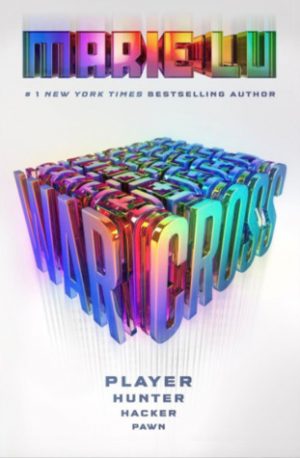 
After a major reading slump in September and October, I’m back to my normal reading pace and have tackled several novels that have been sitting around for much too long. The first of these is a fan favorite and one I’d been meaning to read for a long time. I’ve done it. I’ve finally read Warcross by Marie Lu.

Emika Chen is a hacker and bounty hunter. Her job? Tracking down illegal betting in Warcross, the Virtual Reality game which took the world by storm and has become a staple of modern life. After losing a bounty to another hunter and desperate for cash, Emika hacks her way into Warcross and glitches straight into the opening games of the Warcross World Tournament. ‘Emika Chen’ becomes a household name overnight, but instead of getting arrested as she fears the elusive Hideo Tanaka, the young creator of the game, invites Emika to Tokyo where he gives her an offer. There’s a security problem with Warcross. Someone’s been snooping around, their actions unknown, and he’s in need of a hacker. Emika may not have to worry about financial problems anymore, but a world of espionage, secrets, and dark plots with far reaching consequences opens before her. But the question remains. Is she ready? And can she uncover the mysterious hacker in time?

What I found was nothing like what I expected.

The first thing that drew me to this book was the cover. It’s rather minimalistic in design, but beautiful nonetheless. The second? Well, it’s a book involving a video game, so of course I was going to pick it up.

VR is an enormous part of this story, and handled very well. VR has affected all parts of life, with a VR world superimposed over and interacting with the real one. Unlike other books that feature similar futuristic VR technology, this portrayal feels very natural and more like something which would actually occur. Wearing VR glasses while traversing the city means video advertisements are superimposed over the static images of the natural world’s advertisements. Store window displays feature live models instead of mannequins and with merchandise available for purchase with only the click of a button. The xp system usually reserved for in-game activities is stretched to the everyday as well, with people able to gain xp for everything from visiting a new place (a few hundred xp) to watering a plant (1 exp).

I especially like this aspect of Warcross’s imagined VR. A high level of world building and realism is created using nothing but the various types of VR glasses Emika uses throughout the course of the book. It isn’t hard to see VR being implemented in our world in a similar way, especially with day to day activities people may not want to do such as eating healthily or preforming mundane chores.

The characters were all well-handled as well. The story is told from Emika’s point of view. She is a teenager who has experienced great hardship in her life. She’s been on her own for years by the time the story opens, but unlike the volumes of similarly themed manga I’ve read, Emika’s circumstances are more appropriately reflected in the way she lives. She’s a bounty hunter and part-time waitress. She can’t make ends meet every month. Her Warcross glasses are an old, hacked model despite her work catching people who illegally bet within Warcross due to her severe monetary issues. Emika is a strong character, but fallible at the same time. While able to work on her own and in an official capacity, her independence borders on a self-inflicted isolationism at times due in part to simply not having someone at hand who could be fully counted on for so many years. A well fleshed out supporting cast is held at arms length at times, almost unintentionally so at times on Emika’s part. Some of the characters I liked but didn’t see a terrible amount of I expect will play a larger role in future installments.

As for the characters, this is a very diverse cast. Many of the characters, Emika included, are POC. Queer and disabled characters are also featured. If I had any quibbles at all, it would be that some of these characters, while mentioned or featured briefly, aren’t in the story too much and those who are tend to be sidelined. This is a symptom of Emika’s personality, I feel, exacerbated a bit simply because the book is told solely from her point of view. However, with how the ending is set up, I do think we will see a lot more of the supporting characters in the future.

While the evolution of the main characters don’t throw any major curve balls, it was very well handled. Emika’s has both respected and admired Hideo’s work since she was quite young, and it was learning about Hideo’s efforts which got her interested in tech in the first place and brought her out of quite a dark place after the death of her father. This makes what could have easily become one of the dreaded ‘insta-love’ relationships into a more believable situation, at least from Emika’s point of view.

Avid readers probably won’t find the reveals at the end of the book to be a plot twist by any means. I certainly didn’t. However, it was a development that I liked. While not surprising, the confrontation at the end was at once tense and the very epitome of speculative fiction. There is a great discussion (and I mean this literally) about what is right and what is wrong, the vast gray areas in life, and what draws hard lines that shouldn’t be crossed amid all the murky waters of life at large and morality more specifically. What I liked in particular about this ending is that in many other books the first novel in a series would happen after this point. (Please pardon the vagueness as I’m trying to remain as spoiler free as possible). I like that we get to see the characters evolve to this point, that we can see the development of what may be to come. I like that the questions of what is right and what is wrong – and if we can disagree with someone even when understanding their views and even empathizing with them – is brought into the picture.

Warcross is a book that took me by surprise. I’m ashamed it took me this long to read it, but I am extremely happy that I did. This is a series I will absolutely continue with, and I cannot wait for the second book in the series. Seriously, 2018 cannot come fast enough. While certain aspects of this book may not be especially new or original, the book does what it sets out to do very well. Readers of Young Adult books, near future sci-fi, and video game themed stories will definitely find something to love within Warcross.