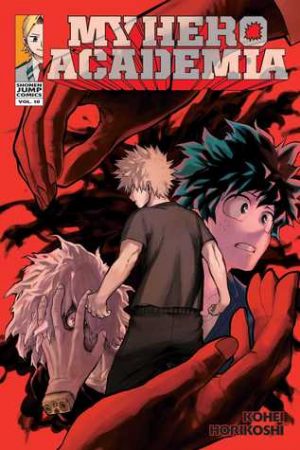 
Happy Manga Monday everyone! I think it’s safe to assume that’s we’ve all been waiting on the edge of our seats for the release of the next volume of My Hero Academia. Well, that day is tomorrow and I am here with an early review of My Hero Academia Volume 10 by Kohei Horikoshi.

This is usually the part of the review where I link up my reviews of previous volumes of series and give a disclaimer on how I’ll try to be as spoiler free as possible. Well, due to the brand new Manga Monday for the blog, a backlog of reviews for all nine previous volumes in the series, and a release date of tomorrow I decided to go ahead with Volume 10’s review first. Reviews of previous titles will be posted, however, and I’ll update this section accordingly.

As for spoilers … Well, it’s a little hard to talk about the tenth volume of something without saying anything that may spoil previous volumes if they haven’t already been read. If you are behind in this series, do be warned as I can’t promise this will stay as spoiler free as usual.

So, yeah. Spoilers. If you keep on reading don’t say I didn’t warn you.

Anyway, the last time we saw our young heroes they were attending a summer training camp along with the other hero class from U.A. The camp was attacked by villains. Their objective? Well, at least one of them was to find Bakugo. Volume 10 opens with the conclusion to this fight, picking up right were the last volume left off with Bakugo being captured by one of the villains.

This is a volume that is sure to keep readers on the edge of their seats. The ending of the ongoing battle is both suspenseful and heartbreaking. Midoriya’s rage and panic at seeing his childhood friend captured right before his eyes and his inability to do anything about it was palpable.

Something I have always greatly admired about this series and Hirokoshi’s artwork is just how carefully everything is drawn. Details are added precisely where and when they need to be. Emotions are more palpable than in many other manga. This volume was no exception, and in some ways possibly filled with even more raw emotion than others.

Though Midoriya’s rage is expressed both in words and visually within the opening chapters of volume 10, when find the exact opposite when he wakes in the hospital. The adrenaline is gone, and here Midoriya looks nothing short of haunted with wide, expressionless eyes and relatively few lines of dialogue. The planning, the muttering of ideas, and being generally inspiring to those around him are gone. It falls upon the rest of the class this time, and no one steps up to the plate more than Kirishima.

Consequences for actions and learning from those actions is something that is often ignored in favor of antics, monster of the week, and pure mayhem in many series. (Hell, I’m still waiting for someone to explain how no one was overly surprised when Yusuke Urameshi showed up to school after being dead for a few volumes in Yu Yu Hakusho.) This caveat is avoided entirely in My Hero Academia. The consequences for the characters actions – or lack of actions – are never avoided or dumbed down and have a very real affect on the plot and the characters themselves. The Academy, its teachers, and their principle are all under fire from the general public as well as tv media for not keeping their students safer and not anticipating a second villain attack. Though in a tight spot with public opinion, the heroes and police desperately try to use it to their advantage in their hunt for Bakugo, using the interview’s air time to mount a rescue mission.

The students, too, are knee deep in difficult decisions. Kirishima and Todoroki have concocted a plan to save Bakugo, but it isn’t without faults and leaves more questions than answers. Going to save their classmate may be noble in one aspect as well as completely understandable as these are young heroes in training. On one level its probably instinctual to want to go rescue Bakugo. Yet, doing so is against the law – the very laws the students are supposed to uphold and enforce once they are full heroes. This leads to a very interesting scene that is quite tense in its own right between the students of class 1-A (those who are conscious and mobile at any rate).

The great question of what makes a hero a hero is delved into more here as well. That same question villains like Stain keep asking is seen in real focus here. Kirishima and Todoroki’s plan involves breaking the law, but it’s all in order to rescue a friend. So what is the right answer here? Does breaking the law in once sense mean that more integrity and a greater sense of duty is upheld? Or should things really be left to the professional heroes who are undoubtedly more skilled than class 1-A?

Speaking of the unconscious and immobile, it can be easy to overlook the damage done in battles. Deus ex Machina’s abound across manga of all genres when it comes to characters getting wounded. Not so here. The vast majority of both class 1-A and class 1-B were treated for injuries, with many hospitalized even if only for a short time afterwards.

The consequences cannot be starker than in Midoriya’s case. After volume upon volume of admonishments by Recovery Girl for caring so little about his own health and wellbeing as well as multiple comments by Aizawa about Midoriya’s abilities being completely inefficient if they leave him literally broken after one use – Midoriya has suffered real consequences and proven both of them true. Not only was he able to save only one person and rendered less than useless when the fight became even more personal, but risks long term, permanent disability if he continues on such a self-destructive path. The human body can only take so much, after all, and Midoriya’s reached that limit.

We get to see two separate rescue missions enacted in tandem – one by the professional heroes and city police and the other being the plan of Kirishima and Todoroki. It is only at this point where we finally see Bakugo and what he’s been going through at the hands of the villains. His utterly indomitable will is something which the villains don’t seem to fully forsee (nor do the media or general public for that matter). But his teachers and classmates do believe in him, sticking up for him. Yet, as heartened as he is by the testimony during the press conference playing in the background, Bakugo’s face resembles that of a frightened child looking up at a parent attempting to comfort them when the pro-heroes burst through the door.

Between fights with villains, arguments between friends, and two separate rescue missions tension remains high throughout the volume. Fears and warning come to pass with Midoriya learning some hard lessons. I will never tire of All Might’s grand entrances and will forever remain in wide eyed wonder of him in much the same way the students are.
Despite the arc being far from over, there is definite payoff in this volume. We learn what becomes of Bakugo and see the actions of both the adults and the students to get him back safely. Lessons learned in prior arcs aren’t forgotten in lue of plot advancement (or, more often, simply for the fun factor). This leads to interesting character dynamics and a sense of real progression of our protagonists as people.

My Hero Academia Volume 10 is packed with action and feeling. A tense arc is followed through and hints at drawing to a close. We see some amazing fight scenes with the professional heroes, All Might included. I cannot wait for the next volume to come out. If you are a fan of the anime, shonen manga, or even American superhero comics I highly suggest reading this series. It does a lot of things right and never fails to entertain.