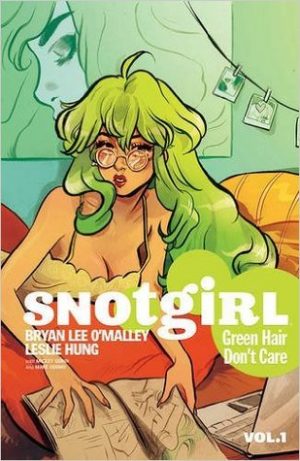 
A graphic novel I’d heard about on booktube (that’s book based youtube videos for any who aren’t familiar with the term) and decided to pick up is Snotgirl by Bryan Lee O’Malley (creator of Scott Pilgrim) and Leslie Hung. While having a slight air of mystery here, this graphic novel doesn’t fall into the usual science fiction, fantasy, or horror genres I normally read.

Snotgirl follows Lottie, a twenty something fashion blogger. While maintaining a perfect image online, she is anything but in real life. Severe allergies make her look and feel distinctly not beautiful or fashionable at all. Those she calls friends are rather self-absorbed and don’t seem to care about her as a person. And, most damningly, the friendly, lovable persona online is merely a façade for a rather terrible personality. Just when she thinks she’s finally found a real friend, someone who can look past her flaws and more insufferable personality traits, a tragic accident occurs, leaving Lottie terrified. After fleeing the scene and locking herself in her apartment for days on end, she finally emerges, attempting to reenter society.

This is a story about terrible people doing terrible things. No one in this story is blameless. A few individuals did seem to have an outwardly good personality, yet, coupled with the rest of the cast, I constantly found myself wondering if they, too, had a hidden side and when it would be revealed.

The plot felt rather slow and meandering, echoing the main character’s lost, dazed haze she wanders through life with. This is very much has a slice of life feel graphic novel. The ending did have a bit of a cliffhanger, but at the same time, nothing of great note happened. This is very much a book about facades and well off people playing long term games with and backstabbing their so called friends. It’s about Lottie’s everyday life and she copes or doesn’t cope with event happening around her or to her.

I normally enjoy books about terrible people doing terrible things, but with this one I felt as if they weren’t terrible enough to keep reading. They were not over the top enough or sadistic enough to maintain that horrified wonder that normally encourages me to keep reading. These characters were just generally flaky or sleazy or just not quite trustworthy enough to be considered a friend. They never entered into the realm of the truly horrible. Were they people you’d want to call friends? No, probably not. But at the same time none of the characters seemed to really be the type that would end up on a wanted poster or the villain of a superhero story either.

While I appreciate the art and trust the creators based on previous titles they’ve released, I’m not sure I will actively be seeking out the next volume in the series. Snotgirl, while entertaining, is not necessarily something I often seek out to read. The plot took too long to wrap back around to the mystery aspect – that being the main character’s new friend’s apparent death – and I didn’t find myself very invested in any of the characters. If you like contemporary stories with some drama and mystery, this might be a title for you.