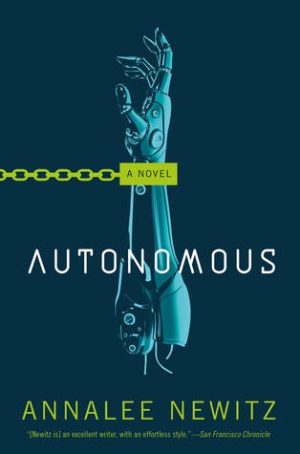 
A book I had my eye on for some time was Autonomous by Annalee Newitz. This is a book about autonomy, what makes someone autonomous, and a race across the globe as an illegally distributed drug begins to rack up an unexpected death toll.

Autonomous is, in a lot of ways, very dystopian. Or it wanted to be. I can’t help but feel that everything wrapped up much too nicely to be considered dystopian. (In the traditional sense of the genre and not counting the Young Adult Dystopians that relate more closely to dark fantasy/sci-fi than to adult dystopian).

The story follows Jack, a scientist turned pirate who doesn’t believe medication should be patented and whose made it her life’s mission to get medicine into people’s hands who couldn’t otherwise afford them. In order to make some quick cash, Jack reverse engineered a new drug that’s not yet available to the public. But the drug has been leaving deaths in its wake and a string of people addicted to work. Elias, along with his contracted robot, Paladin, are sent to stop the pirate by any means necessary.

Despite all of the things this book manages to accomplish, having a deep investment for the characters was not one of them. I found it difficult to empathize with Jack, even if her cause is an ultimately noble one, trying to do good despite using illegal means. Very often she seemed unable to fully realize the bigger picture. I simply couldn’t get a good read on her, and at first I was unsure why.

I figured it out about halfway through the book. The characters, their feelings, and their motivations are always described, never shown. This created a certain distance between myself and the characters that I simply couldn’t overcome. This most likely will not be any sort of an issue for many readers and definitely falls on the ‘it’s not you, its me’ spectrum. However, if you don’t like books written in this way, do be warned.

Still, there is a lot to love here, and I do ultimately think this a book every fan of science fiction should read. It has a lot of things to say on a great many issues, and it ultimately succeeds in doing everything it sets out to.

This is very much a book of questions, as speculative as anything by the greats in the genre. It is not a book of answers. Those are left up to discussion and our thoughts. There are questions of autonomy. What makes someone or something autonomous? Are we ever truly autonomous? If you are suddenly granted autonomy would that change anything or would you make the same choices anyway? Are there things that an entity must do, driven by something internal, whether that is to right a wrong or help someone from your past?

The question of autonomy is probably the most apparent in the story of Paladin and Eliaz. As a robot, Paladin has no autonomy, but can be granted autonomy after a certain number of years. Paladin struggles with the concept of autonomy and how many actions are simply the result of programming as opposed to more conscious decision making. But through Paladin’s observations we are introduced to some interesting ideas to human autonomy as well. Eliaz might have autonomy as far as the world governments are concerned, but Paladin often describes Eliaz in a very methodical, scientific manner – his pulse, his temperature, etc. Several times Paladin mentioned electrophysiological impulses and how Eliaz couldn’t do anything about those, no matter how he truly felt. This, I thought, was a rather interesting observation, leading to questions on how many of our actions are biologically induced and how that relates to autonomy.

In a lot of ways, Autonomous makes the reader come to their own conclusions. This is very much a book that really requires a second read. I feel that there is more to unpack in here, things that will become more apparent when I’m not quite so focused on what will happen plot wise. This is a book that I will definitely be rereading in the future.

Speaking of plot, this was a slower read with an ending that didn’t shock. I didn’t find myself on the edge of my seat at any point while reading despite this very much being a book about exciting things – a chase around the world as the main character struggles to right her unwitting wrongs with many lives in the balance. The ending was foreseeable enough as well.

I liked a lot of aspects about Autonomous by Annalee Newitz. I found this book difficult to rate. One the one hand I enjoyed the setting and the speculative nature of the novel. On the other I found the plot just a little predictable and never felt very attached to any of the characters. Ultimately, I think this is a book that I do recommend reading, and one I plan on giving a second read sometime in the future.