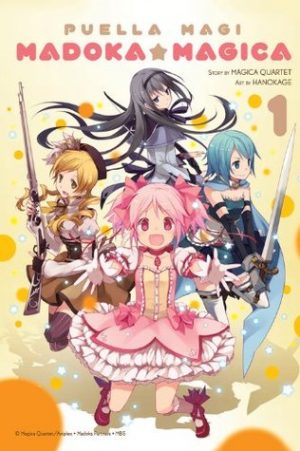 
I think its safe to say that Puella Magi Madoka Magica is an international phenomenon. The story is written by Magica Quartet with the art done by Hanokage, and I cannot recommend this series enough.

A new student transfers into first year high school student Madoka’s class. The girl is familiar, a person from something Madoka knows must have been a dream. It being anything else was impossible. Cats don’t offer magical powers in exchange for your deepest wish. Yet here this girl, Homura, is and she’s fighting a rather familiar looking cat. The offer is again given. If she speaks her deepest wish, she will be granted both magical powers and her wish. But it isn’t all fun and games. The world of magic is a world of high danger and seemingly little personal reward. The lost are not mourned here, and evil stalks the innocent.

Puella Magi Madoka Magica is very much a subversion of the magical girl genre. Despite having many of the staples such as cute protagonists with candy colored hair and transformation scenes, a lot is done to avoid tropes and stereotypes usually associated with the genre. The story starts out rather lightheartedly. Madoka is faced with a mysterious situation and the invitation to become a magical girl. But this isn’t a world of villains easily defeated by the power of friendship alone.

The world of Madoka Magica has a hidden side. Witches stalk certain places, warding off areas so regular people can’t find them where they spread darkness and evil. These witches aren’t the typical person with dark magical powers. These are formless, changing beings of utter grotesqueness. The danger here feels much more real than in many other similar titles I’ve read. There is a real question as to whether all of the characters will come out unscathed when another battle starts. The main character also doesn’t just blindly agree to becoming a Magical Girl. Multiple people warn her about making a hasty judgement. Madoka’s own experiences enforce this. I think this is the only magical girl manga where the main character really grapples with this choice.

This grapple with what to do is enhanced by Sayaka, Madoka’s friend and fellow potential magical girl. Madoka and Sayaka, while friends, are quite different in some important ways. While Madoka doesn’t have any sort of deep wish, Sayaka does. But it isn’t a wish that would benefit her, and so she waits, contemplating her options and tries to figure out what would be best.

Something else that, perhaps, isn’t terrible important plot wise but something I very much appreciate being included is Madoka’s family. I know that may sound odd, almost irrelevant, but here me out. So very often parents are ignored or not written into a story when it would inconvenience the plot. School also often falls into this elephant in the room category. But Madoka has not one but two parents, ones that aren’t conveniently working in another city or another country, but actually live with her. Not only that, but it appears her father is a stay at home parent as he is always shown cooking for the family while Madoka’s mother, smartly dressed in a suit, hurries off to work.

I’ve never quite thought about it before, but there aren’t very many books, manga or otherwise, that portray this family dynamic. It’s one I appreciate, though, as that’s how I grew up. My mother left for work every day in a business suit and my father stayed home and tried to wrangle myself and my siblings into something resembling controlled chaos. It’s always nice seeing something in literature that so obviously resembles you, your life, or something your familiar with, and this portrayal of Madoka’s family definitely fits that bill for me.

The translation was done by William Flanagan, who is the translator of series such as Fairy Tale. I’ve always liked his translations, and Madoka Magica is not different. In particular, I appreciate how the translations of onomonpeias are handled. I’m talking specifically about the large text superimposed and combined with the background art of certain cells. A translation in small text is included, a literal translation. Beneath that is what that particular sound would be in English. For example the ‘pi! pi! pi!’ of the alarm clock has the inclusion of ‘beep! beep! beep!’ in ellipses beneath that. I like how this was done. Giving two translations doesn’t take up that much space, and helps many different kinds of readers. The translation remains very true to the text while also clearing up any possible confusion that could occur without having to flip to a glossary or notes section in the back of the manga.

The art in the manga is very versatile and captures the essence of Madoka and the two worlds she inhabits very well. Madoka is a generally kind, happy person, the sort of individual who we often follow in magical girl stories. The art reflects this well. Scenes depicting Madoka with her family and friends, or showing her at home or school art very bright with lots of white space. Backgrounds are sometimes a bit minimalist, but never to the point of nonexistence which is so often found in shojo manga. The art changes, sometimes very drastically, when faced with witches and their warded strongholds. These sections are filled with terrifying looking creatures and warped architecture. Dark shadows abound and a real sense of the macabre shines through.

Puella Magi Madoka Magica is popular for a reason. This is a manga that takes traditional magical girl manga and takes it to places not usually trod. It is just as much a story about choices and people’s inner desires as it is a story about magic and the ongoing battle between good and evil. This is a series I look forward to continuing, and I cannot recommend reading Puella Magi Madoka Magica enough.