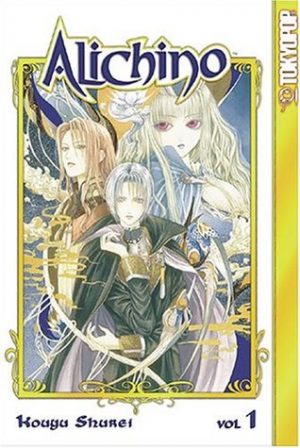 
Sometimes we pick manga we never heard of up at the library. Sometimes this a turning point, a time when we discover older or more obscured series that we collect the boxed sets of and treasure forever. This is not one of those times.

Alichino Volume 1 by Kouyu Shurei is not the most excellent manga on my library’s shelf. However, it is one which they’ve collected all of the volumes of and that was enough for me.

The story opens with a young woman searching for an Alichino, a mysterious otherworldly beings that have the power to grant any wish, but for a price. She meets Tsugiri, a young man she mistakes for an Alichino. Tsugiri may not be one these powerful beings, but he does have a connection to them, one that is deeper than even he knows.

I should have been more wary of this title when I flipped through the book and realized that TokyoPop never bothered translating the preview for volume 2 found at the end of the manga. I just chalked it up to TokyoPop being, well, them, and moved on.

Speaking of moving on, let’s take a look at the art. Now, I will readily admit that the mangaka can draw. Character’s eyes are quite piercing. Hair is drawn with all the light, featheriness of real hair. Patterns on clothing are extremely detailed, their folds falling in ways that make you almost hear the rustle of fabric.

Yet, for all of the care characters are treated with, the manga itself suffers. Page layout, text flow, and cell composition do suffer. Some pages are mostly black with only some text. Multiple cells are simply a patterned background with some text. Those cells that are fully drawn have a tendency to show only a part of a character’s face and little more. Movement in active scenes is almost nonexistent. Battles are static to the point where what each character is doing becomes obscured. This makes it very difficult to figure out what exactly is happening during certain sections of the manga. It isn’t always clear when a new character enters the room, or who is speaking.

I was hoping that the plot would make up for any pitfalls the art and layout might have fallen into. I’m not positive that entirely succeeded. The way in which the Alichino were first introduced reminded me greatly of the manga xxxHolic by CLAMP and the method in which Yoko helped the customers who found her shop. The story continues with an interesting enough but also predictable plot. More Alichino seem to be closing in on the town where Tsugiri lives, and they don’t seem to be quite as friendly as the Alichino he lives with. Tsugiri quickly becomes a target of these creatures. Why? Because there’s something different about him. Of course he has a dark past that he can’t quite remember because his memory was wiped when he was a child, presumably to spare him the horrors of what occurred.

Despite not generally enjoying the manga nearly as much as I had hoped, I may read the second volume anyway. As far as I am aware, this is a short series with only four volumes in total. All of these happen to be at my local library, and if I do continue I’ll definitely check them out there. Though a bit derivative at times, Tsugiri’s backstory is interesting enough to make me curious as to what happens to him.

Alichino by Kouyu Shurei has its flaws, but the plot has some interesting elements. Fans of manga made in the 90s might find more things to like in this title than other readers, as it does seem to draw on some elements in both an artistic and plot sense from other works around that period. However, a poor page layout and uninspired panel design detracts from the manga, which is a great disappointment as the character designs and artistic talent are quite good.