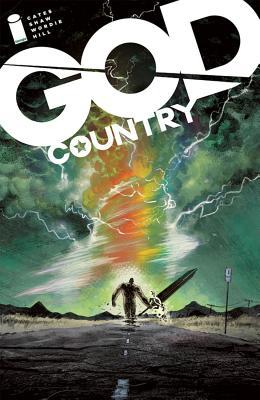 
I am always game for a story about a giant Final Fantasy styled ridiculously oversized sword. Look, I just like them. They look cool. And they look cool in artistic formats like video games and graphic novels. When I found out God Country by Donny Cates and Geoff Shaw was about an older gentleman who finds an enormous sword, I knew I needed to read it.

The story follows Emmett Quinlan, an older man who suffers from Alzheimer’s. His children and the local law enforcement are having an increasingly difficult time handling Emmett’s violent outbursts. A storm sweeps through his Texas town, leveling his home. But when Emmett emerges from the storm, he is a different man, a man that his son thought was lost to disease. A magic sword has granted him a sound mind and great powers. But the sword belongs to someone else, and they will stop at nothing to get it back.

This was a bit of a roller coaster of a graphic novel for me, and not necessarily due to the plot.  The opening pages of God Country hit hard. The opening scene shows the sheriff of a small town in Texas returning an Alzheimer’s ridden father to his home and son turned caretaker after sneaking out of the house without anyone’s knowledge. The sheriff tries to tell the son that it’s time, that the Alzheimer’s is too advanced, and that they should really consider a nursing home. This scene hit hard, having been in similar situations and discussions with family members. The heartbreak, the questions with no good answers, all of that felt very real. Everyone’s experiences are different, of course, so not everyone who has cared for an Alzheimer’s patient will be able to relate to this scene the same way, but it did add a lot of realism to the story.

However, this hard hitting emotion didn’t quite carry through to the rest of the graphic novel for me. Overall, this is a very action packed story. There’s plenty of fighting scenes. More emotional scenes are also prevalent, but none of them had the same sort of impact that the opening scene managed to convey. Scenes that, for all purposes, were supposed to be gut wrenching never quite left me feeling that way.

There were some interesting questions posed in this graphic novel. Emmett had a real second chance, a chance to say the things he never said or never had a chance to. Yet, nothing changes. He is the same person he always was for better or worse. The relationship with his son doesn’t change very drastically despite the young man trying rather desperately to get Emmett to say something, anything. This brings up some really fascinating questions. Many other stories with similar themes play off of the concepts of things left unfinished or what could be changed if there was a second chance. In a lot of ways, God Country subverts that, with Emmett being very much the same person he was before Alzheimer’s took hold. This is something I haven’t seen a lot, and it was rather interesting to see play out.

I have some mixed feelings about the art, too. The fight scenes were a strong point, with all of the flashiness one would expect when a character fights with a greatly oversized sword. While we don’t see a terrible amount of the Kingdom of Always, this was also rather fascinating, and I dwelled on these images, along with the battle scenes, the most. The characters, however, were unappealing from a visual perspective. Faces looked sort of mushy and lumpy. Noses were pointy and eyes tended to be squinty. Color palates used fit the settings well. Bluish tones were used in Always while Texas had more yellows, browns, and reds, highlighting the grassy landscape.[/parapgraph]

This isn’t a story with a happy ending. Even so, the ending was very satisfying and fitting for the story being told. I won’t say too much more on this due to spoilers, but the story wrapped up extremely satisfactorily.

Despite a good ending, the story was, overall, forgettable. I only read God Country three days prior to sitting down and writing the review, but already details are fuzzing over. I think it’s worth a read. The premise is quite original. I like seeing heroes and main characters that are so out of the norm. Going into this I expected to rate it extremely highly. Unfortunately, it didn’t quite live up to initial expectations. Still, if this sounds even a little interesting to you, I do encourage you to read it.