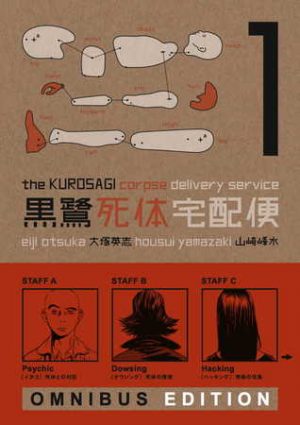 
One of my favorite manga genres is quickly becoming the horror genre. I had my eye on The Kurosagi Corpse Delivery Service Omnibus Volume 1 by Eiji Otsuka and Housui Yamazaki for some time now. This omnibus edition collects volumes 1 to 4 of the manga together in one place, is a monstrous 640 pages long, and is perfect for binge reading. Which is exactly what I did.

This manga features five students and ex students studying to become monks. However, the job market isn’t what it should be and none of them exactly fit in well with the regular 9 to 5. But that’s just with the living. The dead have lingering desires, wishes they want fulfilled, and even in death they’re willing to pay. This follows Kuro Karatsu and four others as they fulfill the last wishes of the deceased clients.

The story starts a bit episodic. Each chapter in volume one tells its own story, a format the manga largely follows throughout the omnibus. We follow Kuro Karatsu as he volunteers with a group helping to find bodies in a forest famous for suicides. Things intensify quickly. Each character has their own skill, whether on the mystical or scientific side. Our main character is able to speak with the dead. Another uses traditional diving to find bodies instead of the traditional water. The oddest ability, and one that is odd even to the other characters, is a character who, supposedly, is able to channel an alien spirit to a hand puppet he carries around with him. This is, by far, the oddest most ‘only in anime’ thing about the series thus far. I can see some people finding this strange, maybe too strange, but I found it fit with the theme and characterization well, especially since some of the other characters seemed to find this odd as well, even if they had special abilities of their own.

However, magical powers aren’t all we see here. More scientific abilities are shown as well – one character is an embalmer, another is impeccably skilled at research. While none of the jobs would occur if Karatsu couldn’t speak with the dead or Makoto Numata couldn’t using divining to find bodies, much important information would be lost if Keiko Makino wasn’t a trained embalmer. Each character has their own talent, and they work very well together as a group. Science and magical and spiritual abilities come together wonderfully in this manga, and was an aspect I liked.

As can be expected, this manga can get quite dark and pretty graphic. Remember, it comes wrapped in plastic for bookstore shelves for a reason. Graphic murder scenes, dead bodies, and more are shown throughout the manga. The manga definitely has a frightening, creepy tone, and the art reflects this.

I really enjoyed the art in this manga. The character designs were great. Each character is very distinct and memorable. This isn’t a manga where characters have a sameness to them at all. The panels flowed very well, naturally dragging the eye along. There were some wonderful, extremely detailed one and two page spreads scattered throughout the omnibus as well. The two page spreads, while beautiful, are were a little difficult to see. The way this particular omnibus was created would have meant breaking the spine in order to see everything where the two pages meet. f you’re a collector of manga and this is a deal breaker I’d definitely recommend buying the individual volumes instead of the omnibus editions.

What starts out in a rather episodic manner does change going into the second and third volumes. Story arcs become a little longer. Character’s backgrounds are explored and are more relevant to the plot. There is still an episodic feel here, but it doesn’t lack the sort of forward momentum that other series I’ve read have fallen into.

I would definitely recommend reading The Kurosagi Corpse Delivery Service by Eiji Otsuka and Housui Yamazaki. This was a truly great read. It was atmospheric with some very creepy sequences. If you like the horror genre this is a series you’ll want to pick up.