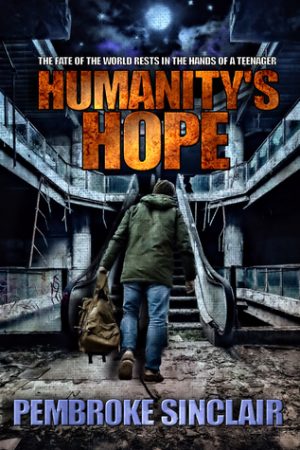 
I’m not sure if things one genuinely enjoys should be called guilty pleasures, but zombie novels would definitely that category for me. I’m always up for a good zombie story. Well, I was offered the chance to read Humanity’s Hope by Pembroke Sinclair, which is, you guessed it, a zombie novel. Let’s take a look, shall we?

Caleb is a teenager just trying to survive in post zombie infested world. It’s safe in the city, or safer than most other places. He has a job, a place to live, and with the help of his psychiatrist is trying to slowly move forward. But there are rumors of experiments done in secret to find a cure for zombie virus, and when a neighbor is killed in an unheard of zombie attack in the city Caleb begins to wonder if there’s any truth to this. Soon he finds himself on the run, apparently immune to the virus. He’s fought zombies before. But humans are stronger and infinitely more clever.

The story takes place in an interested time during the zombie apocalypse. Civilization has cobbled itself back together, at least in some places, and our main characters has already traversed the wastelands and found somewhere safe. However, the zombie virus has not been cured, zombies are still rampant, particularly in the lands beyond cities. Peace feels tenuous. People try to go back to the way things are, outwardly ignoring certain aspects of how things have changed socially and culturally but accepting others. For example people are subjected to blood tests at regular intervals to ensure no possibility of a zombie outbreak, and teenagers are regularly employed in the general workforce due to a severe lack of shortage of manpower. Yet, while treated as adults in most aspects and by and large having gone through literal hell, surviving odds they never should have survived, teenagers must still live with a legal guardian.

I really enjoyed the widespread social and cultural aspects included in the novel. I also liked the aspect that mental health plays. Caleb has survived a lot, outliving his family and friends, and had to do whatever he possibly could to survive. But this has left a huge mark, one dealt with in the book. I find that the psychological toll of something like the zombie apocalypse isn’t often dealt with, at least not in very much detail, in many of the zombie books and manga that I’ve read. This was a welcome change from the norm.

This was not a fast paced read. What could otherwise be an exciting thriller remains slower paced due to Caleb’s inner monologue. At first, I enjoyed such a close look at the main character’s thoughts. However, the fretting, the explanations, and the indecisiveness became repetitive. Everything was explained verbally, even when dialogue or body language explicitly showed what Caleb was thinking or how he felt. This bogged the story down in some sections. Certain conversations crawl along due to being broken by long paragraphs of exposition. Later chapters fell into this especially. A good deal of world building was provided in earlier chapters, painting a very comprehensive picture of the city and the social structure where Caleb lives. Things that were explained in the first half of the book are re-explained in the second half when Caleb encounters these people/objects/situations again.

The ending was rather abrupt. It feels as if this was the first book in a series, but as of now no future books in this series have been announced. The twist at the end was rather unnecessary. Motives were explained, but still felt a bit out of character. The last chapter doesn’t feel like the concluding chapter of a novel, but rather like the second to last or third to last. A good number of questions remain unanswered. Objects and characters that were introduced are left hanging, completely forgotten about or else deliberately ignored. The city and how it functioned were outlined rather well. Caleb’s character was also provided a good amount of backstory. His actions were usually understandable. This made the abrupt ending, the lack of follow through with plot elements, all the more disappointing.

While Humanity’s Hope by Pembroke Sinclair started strongly, featuring an interesting main character and good world building, it ended rather abruptly. If there was any indication there would be a sequel I would still wish for a bit more closure, but would understand why the plot stopped where it did. However, if you like zombie stories and are looking for something that include the psychological repercussions of a zombie uprising check out this book, because that is where this novel truly shines.