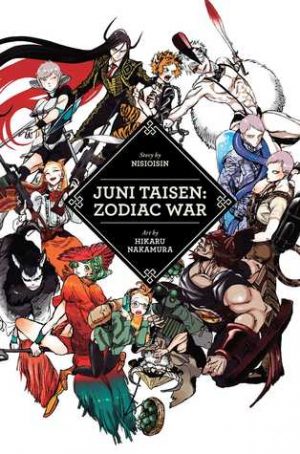 
I can’t believe I’ve never read a book by NisiOisin before. Not only that, I’ve only just started watching Bakemonogatari. Finally I can say that I’ve read something by this author! I happened to come across an absolutely beautiful copy of Zodiac War by NisiOisin in my local bookstore not too long ago and immediately picked up a copy.

This book is about the Zodiac War, a battle that occurs every twelve years between fighters which represent each of the twelve zodiacs. What you see is pretty much what you get here. The story opens with the introduction of this year’s Zodiac War by the overseer of the event before following each of the combatants as they utilize everything they possibly can in order to secure victory.

The point of view changes rather frequently in this book. Yet where other books I’ve read have trouble with story flow while switching between only two character’s point of view, this novel makes twelve points of view feel like the most natural thing in the world. Each fighter, or nearly each fighter, gets a section from their point of view. The transitions from one chapter to the next were extremely smooth. The point of view was never confusing, and each character’s voice was distinct enough to stand out from the rest.

The character’s themselves were a very eclectic bunch. All were masters at something whether it was a fighting style, weapon type, or a more fantasy based ability. Personalities were also incredibly varied. There wasn’t a single character I didn’t like reading about, nor any one character that I particularly disliked. Each one was very interesting in their own right.

The book is divided into ‘Battles’ as opposed to chapters. Though titled differently they work the same, dividing the book at appropriate points and are further broken down into shorter sections. Each new chapter features an image of the character who’s point of view we follow in that chapter as well as a short biography page that tells a little bit about the character’s background.

One of the interesting parts of the novel is that it only follows the Zodiac War. We see the participants fighting against one another, struggling to win. Some fight because that’s their job. Other’s fight because there was no way to turn down the invitation to fight. And some just want the wish they will be granted if they win.

Needless to say, this is a very fast paced book. A lot happens within 250 pages. There is plenty of fight scenes, some great strategizing, and I loved every second of it. What isn’t talked about is the larger implications of what the Zodiac War is and what it means. That isn’t to say that this is never discussed at all. Enough background is given both about the Zodiac Wars themselves and through some character’s pasts that readers get a solid idea of what it is and what it means. However, as the narrator states, this is a game on two levels. A physical one for the fighters, and a game of politics and money for those who organize it. And the latter is not something that the fighters, especially while on the battlefield, are thinking about in any great detail.

I would be interested to read more about these characters and this world. Thankfully, we do have a little more available to us. There is a one shot manga included within an anthology called Ogiri which features one of these characters, something I will definitely be searching for in the near future.

It isn’t very often that we get a high quality light novel release like The Zodiac War. This is a hardback with a beautiful dust jacket featuring all of the Zodiac War’s participants. Beneath the dust jacket is a gorgeous cream colored hardback covered in the character’s depicting the various animals of the zodiac and the same diamond shaped title and author image from the dust jacket. This is a book you’ll want to display, and if you’re like me, minus the dust jacket.

I really enjoyed Zodiac War by NisiOisin. In the near future I’ll be both looking for the manga anthology Ogiri as well as watching the anime based off of this book. If you like fast paced stories with some light fantasy elements, definitely pick up this book. I highly recommend it.