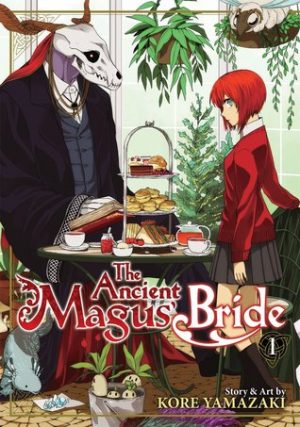 
I am very late to the party on this one. Usually I keep up with each season’s anime releases, but alas, I’ve fallen behind. But a new anime usually means Amazon discounts on its corresponding manga, so I picked up the first volume of The Ancient Magus’ Bride by Kore Yamazaki.

Chise Hatori is the main character, a Japanese girl who was orphaned at a young age. She has long since gave up on everything, entering the realms of magical beings and was previously sold into slavery. When she is purchased at auction by an ancient, inhuman magus, Elias Ainsworth, Chise is given a new lease on life. Suddenly she finds herself freed and apprenticed to a mage. Now she has the ability to move forward – to learn about magic, her potential, and to heal.

Despite being slow paced, the manga wastes no time in introducing the characters and the situation. There aren’t any superfluous chapters introducing the world, the characters, or their circumstances. Instead it opens with Chise being auctioned off and immediately delves into thick of things. The background of Chise is introduced slowly throughout the course of the novel, never having flashbacks that are too long or slowing the momentum of the story.

The majority of the volume takes place in rural England. This is a place where magic abounds. Each chapter explores some new magical place or aspect. Elias is often called away to other places, usually throughout England but to other locations as well, assisting in magic related conundrums. As his new assistant, Chise follows him on these missions and learns about the magical world. Sometimes she assists directly. Other times she takes the role of an observer.

The magical world portrayed in this manga has a sort of addicting quality. I haven’t wanted to read something solely to see how the magical world evolves for a very long time. This is a manga that captures that same elusive magic, that feeling of pure otherworldliness, as Harry Potter. Is it anything like Harry Potter in any other aspect? As far as I can tell, no. But the world the story is set in feels absolutely magical, and is one I want to linger in.

One of the only things that felt just a little out of place was the ‘you will be my bride’ aspect. This isn’t something that’s really spoken of much in the manga. Elias merely states that Chise will be his fiancé and that is that. I’m not sure at this point if this is done for some kind of plot reason, if it’s done for laughs, or if it’s used to show how out of touch with social norms Elias is, as he is shown to not go out or interact with people (human’s at least) very often. When looking at the volume as a whole there were some scenes in chapter one which felt a little bit out of place in tone compared to the rest of the manga. I know some readers don’t like an early scene where Elias tells Chise to take a bath and that he’ll scrub her clean. Elias doesn’t seem to understand why Chise says no and that she’ll do it herself. I can see why some people don’t like this, but I took the events as Elias trying to care for the girl, and overstepping human social norms. After all, what does he know about human social norms? He’s one of the last magic users, someone with immense power, who doesn’t have a flesh body, or at least a flesh head.

Either way, the rest of this volume doesn’t feature other scenarios like this, making it stand out more than it otherwise would.

The art in this book is quite clean. Characters are well designed. Eyes, particularly those of Chise, are extremely expressive. The sense of magic comes through clearly. There are some wonderful spreads throughout the manga. Backgrounds tend to have a good amount of detail, showing off the magical aspect or else the light and beauty of the natural world.

This is definitely a series I will be continuing with. The world the story is set in is filled with magic and fascinating creatures. Honestly, I would continue reading just to experience more of this world. If you like rich fantasy worlds you will definitely want to check out this manga.