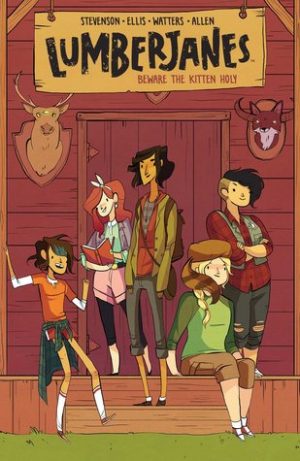 
I’d recently heard some very good things about Lumberjanes by Noelle Stevenson, Grace Ellis, Faith Hicks, and Brooke Allen. When I found copies available in my local library I immediately delved in. This is a fun fantasy/mystery series that follows a group of girls at a Lumberjane sleepaway camp. The forest they’re camping in holds secrets, though, and seems to be filled with magical creatures. The story follows these girls as they go on various adventures and try to solve the mysteries of the woods.

The story is very action driven. There isn’t a lot of down time. We don’t see them sitting around their cabin talking or taking part in too many camp activities. The girls are constantly going on adventures, trying to dodge their camp councilor, or trying to explain themselves when they finally turn up again despite knowing they will never be fully believed. Yet the story never felt overly fast, instead maintaining a quick but steady pace throughout. The ending of Volume 1 also felt like an actual conclusion, something that doesn’t always happen just by the nature of graphic novels and comics. It was great having an ending that felt fulfilling in itself while still making me want to read the next volume.

The plot is also great. The girls from the Roanoke cabin at a Lumberjane Camp (think overly woodsy Girl Scouts) keep seeing strange, explainable things in the woods beyond their cabin. Despite the head of the camp seemingly believing their stories, their camp counselor – a slightly older girl who’s in charge of their day to day oversight – does not, and is constantly exasperated by their disappearing on adventures.

Each chapter starts with a Lumberjane badge and a description of what it is. These chapters always have something to do with this badge, if not directly then at least thematically. The last page of each chapter was a page of photos supposedly taken during that chapter’s events which are taped over a page from the official Lumberjane handbook. Both the beginning and ending pages were very cute, but also added atmosphere.

The cast in this graphic novel is great. The girls play off of each other very well. Banter, of which there is plenty, feels natural and not at all forced. All are of varying ages. Some feel more like middle schoolers, other more like high schoolers. Character design and voice are very memorable as well. I did have some issue remembering what the character’s names were, however. We don’t see their names typed out very often. At least it didn’t feel that way. Despite the characters having simply, otherwise easy to remember names I still struggled a bit to put faces to names.

The art in this graphic novel is very bright, not at all falling into the ‘dark and spooky forest’ monotones that video games especially seem to fall into. Lots of thick lines boarder images. The facial expressions are extremely varied and convey a lot of emotion. They remind me of manga in a way, at least in how varied and extreme expressions can be.

This is most definitely a series I will be continuing with. Volume 2 has already been checked out of the library with plans to read it soon. If you like shows like Gravity Falls, you will definitely enjoy Lumberjanes. Stay tuned for a review of Volume 2 sometime in the near future!