Review – The Best We Could Do by Thi Bui 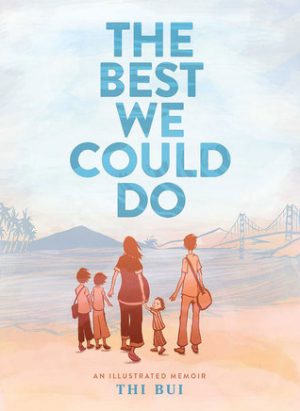 
Memoirs are not a genre I often read, even when they do happen to fall into the graphic novel genre as well. Honestly, this may have been the first memoir – not a story based off of someone’s life, or a biography – I’ve read that wasn’t assigned reading. But graphic novels! Those I most definitely read, and it was only a matter of time before I picked up this beautiful graphic novel that has been nominated for multiple awards. The Best We Could Do by Thi Bui is as heartbreaking as it is beautiful. It is a story of family, war, refugee life, and starting over again, no matter how many times it takes.

The Best We Could Do follows the life of the author, Thi Bui. It begins when she gives birth to her son, but as much as it is a story about her life, her childhood in particular, it is a story of her family. The lives of her mother and father are drawn out in detail, following them from young children into adulthood, marriage, and parenthood. It is a story of Vietnam, of the hardships its people endured, and the sacrifices they had to make on a daily basis in order to survive.

This is a book that will make you feel things. It is easy to sympathize with the author, to feel her pain, her conflict, her fears, her love, and her happiness. Her words are honest and stark, something that is reflected within the title.

While it is so easy to sympathize with the author, it was, at first, quite difficult to sympathize with her parents. Their flaws are highlighted at the start of the text. Bui’s fears and thoughts as a young child are easily felt and understood. Like Bui, we travel backwards in time, learning about her parents bit by bit. Slowly, these two characters who were painted in such a black and white light at the beginning of the novel begin to be seen in shades of gray. The facade of ‘parent’ falls away along with the childlike visage of the good and bad within them both. They become real, multifaceted, complex people who have lived through more than their fair share of hardship and heartbreak.

The vast majority of the book takes place within Vietnam. The characters are thrown from one war into the next and from one regime to another. Life is tenuous. Family members come and go from their lives. Everyone looks out for themselves, often above even the well being of their own children. Family disappear and reappear in their lives. Yet, when their young family is in danger, when things begin to get worse once again, they stay together. They don’t save only themselves.

Bui’s parents are complex individuals who endured more than anyone should ever have to endure. They are strong people, people who have overcome immense odds in their lives. They aren’t perfect by any means. No one ever is. But they are understood, even in all of their flaws, and their story bared for all the world to see.

The art is perfect for this book. The color palate is muted. The style is a bit minimalist. All of this reflects the story being told perfectly. The bareness of their existence, suffering through famine and wartime, is reflected not only in the sparsely filled panels, but the lack of intricate details as well.

This story and its emotions are raw. You feel emotions when reading The Best We Could Do in ways that other books don’t quite manage. Thi Bui is a magnificent storyteller. Either way, it is as near to perfect as a graphic novel could ever come. I am very happy I took a chance on this memoir, despite usually shying away from the genre. If you, like me, do not read a lot a nonfiction or memoirs, this is a fantastic place to start, especially if you are already a fan of graphic novels, comics, or manga.