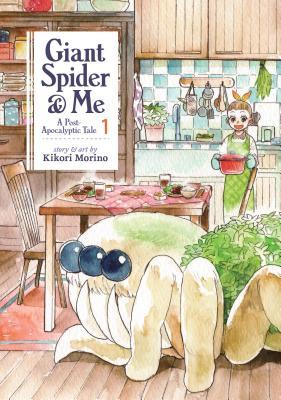 
You know, I’m really beginning to love the ‘end of the world slice of life’ manga and anime that have been released recently. The latest in this wonderful vein is a manga called Giant Spider & Me: A Post-Apocalyptic Tale Vol. 1 by Kikori Morino, released in English for the first time on February 20, 2018.

Nagi is a young girl living in a post-apocalyptic world. While her father is out exploring, she stays home caring for the house. One day while out gathering vegetables she meets an enormous giant spider who follows her home. What ensues is a tale of friendship, of family, and of understanding one another despite a sea of differences.

The story takes place in the post apocalypse. The world as we know it has ended. Everything has changed. And, nothing has changed. Life goes on, sometimes much the same as it does now. There may not be large cities anymore. The ruins of the cities that are left might be largely underwater. But towns still exist. People still make friends, help one another, and care for each other.

That is what Giant Spider & Me is about – friendship and understanding, even in the face of such vast differences.

Both Nagi and her giant spider friend are absolutely adorable. ‘Cute’ might not be the first word that comes to mind when the term giant spider comes up, but this isn’t Shelob or some other nightmare creature. It’s an overly large spider covered in leaves and soft fur that behaves somewhat like a huge, eight legged puppy. It wants company, likes cooked food best, and protects Nagi from the very real dangers that lurk beyond the immediate safety of her home.

The chapters are episodic in nature. There is no overarching plot beyond Nagi’s day to day life. There are questions as to where her father is and if he’s alright. And of course there is plenty of room to explore what caused the end of the world and why. But those things aren’t necessarily the focus of the story. Nagi herself reinforces this when she brings her giant spider with her to a cliff which overlooks the ruins of a once great city swallowed by the sea. The two page spread is beautiful, yet haunting, bringing up many questions as to why this occurred. But Nagi isn’t interested in that. What she wants are the chestnuts that grow in the area and redirects both the spider and ourselves back to the task at hand.

The art in this manga is lovely. Certain sections feel hand drawn in a way that not all manga feels these days. The main characters are cute as a button. What could turn into many arachniphobe’s worst nightmare is somehow rendered downright adorable, which isn’t something I really ever expected to say of giant end-of-the-world spiders.

The ending of the manga does have tension, and there is a cliffhanger. The manga is rather lighthearted and doesn’t have a lot of tension, but it isn’t as though tension doesn’t exist. The stakes are risen as the manga goes along, maybe not risen very quickly at first, but it is present nonetheless. The change in seasons means a change of diet with all of the summer crops dying out. An increase in the wild dog population makes scavenging in the forest quite dangerous. A leaky roof isn’t always an easy fix, and finding lodging doesn’t seem to be quite as simple as it once was. With this, the cliffhanger ending doesn’t feel out of place at all.

One of the things I love the most about this manga are the recipes. A great deal of the story is focused on Nagi learning about her new spider friend and bonding over shared meals. Nagi talks her way through the cooking, explaining to the spider and the reader what she’s making and how she’s doing it, and a recipe for that meal is included within the chapter. Unlike, say, Food Wars, which also includes recipes, these feel very easy, are made with pretty simple ingredients, and feel like something that even I could make. For someone who’s burned boiled eggs and made inedible rice balls, is really pretty important.

I really love Giant Spider & Me: A Post-Apocalyptic Tale Vol 1 by Kikori Morino. It’s a quite tale about friendship, a happier, mundane look at the post apocalypse. This series has tremendous potential, and I look forward to more in this series.