Review – The Book of Joan by Lidia Yuknavitch 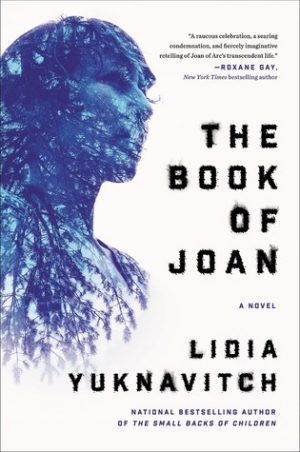 
I really love dystopian books. I really didn’t love this dystopian book. The Book of Joan by Lidia Yukinovitch was disappointing conglomeration of ideals that at once said nothing of substance and beat the reader over the head with what messages it did convey.

The story follows several characters, most notably Christine and Joan. The world we are introduced to is a post-apocalyptic wasteland unfit for humans. What few people there are left live aboard CIEL, a space station looking  down on the dying Earth. Christine is one of those aboard CIEL, is old enough to remember how Earth used to be, and soon finds herself at the mercy of the insane Jean de Men. As she deals with her own trials she reflects on a woman she once knew, Joan – a key player in the war that destroyed the planet, but someone who is also key in saving what little is left.

Dystopian fiction is, perhaps, my favorite genre. I started reading dystopian novels when I was young. Really young. I read Animal Farm in 6th grade, not because it was required reading, but for fun. Needless to say, I wanted The Book of Joan to be another addition to my shelf of beloved dystopian fiction. Unfortunately, that was never to be.

This book tries to be a lot of things. It tries to speak the unquestionable truths of the universe, the sort of things that are quotable, that speak to you no matter who you are or where you live. Yet, it also is heavy handed, beating the reader over the head with its metaphors, just in case they weren’t understood at first glance. Most unfortunately, the scraps of a fascinating plot involving war, environmental disaster, and a human race that is physically changed by this is lost in a myriad of time skips, point of view skips, and unexplored ideas. This is the most egregious case of told not shown I’ve ever seen. And not because there are just characters standing around talking to each other or otherwise reminiscing on their own a great deal of the time. The prose is poetic, wanting itself to be quoted, wanting to tell the reader something, wanting them to come away more knowledgeable then they went in. But it doesn’t give the text – or the reader – any breathing room thus making the narrative suffer as a whole.

A fascinating story about the decline of the human race, its physical change, war, and the destruction of the earth is buried, somewhere, within this novel. We get scraps, hints, but the more interesting parts remain largely untold. The most interesting concepts and events are briefly mentioned and never discussed again. Everyone on CIEL is killed at 50, but for what reason? A little more water, one of the only scientific discoveries they’ve managed since they left Earth? Why bother, when they are getting water from earth anyway? The population will never grow, not with no viable method reproduction. Clones are mentioned, but cloned how? This great, terrible war that began everything is never gone into in full detail. Who was fighting? Why? What started it? What were the different factions? Why did the earth become so ravaged so quickly? The short is, the obvious – nuclear attacks, etc. But these reasons are never stated in any sort of great detail. Characters may reminisce about the war, the earth they left behind, the people they lost, and how they felt about their bodies changing so utterly, but we hear all of this second hand. We don’t get to see it through the character’s eyes as it is happening. We simply receive some anecdotal discussion about it later on in their lives.

The Book of Joan is more of a collection of ideas, themes, and motifs than a story with a plot. Surely, this novel has something important to say – about the environment, about sexuality, about being human, and about being female. Yet, it never quite gets there. What there is, is heavy handed. It has no subtly, no art, no grace. For example, when one dying character is held by another, the first draped over the second’s lap in imitation of the Pieta – any of the myriad of famous renaissance images of the dead Jesus draped over Mary’s lap, cradled in her arms – the author assumes that we will never understand the reference and has the characters actually say how they look like Mary and Jesus in the way they’re sitting. It is a message dictated to the reader, not one gleaned from great plot. More infuriatingly, it treats the reader as if they will never possibly understand the reference if it is not directly handed to them.

There is very little plot to be had here. The action jumps from one set of characters to another. Sometimes we are in the past, experiencing moments in Joan’s childhood. Other times we are in the future, experiencing Christine’s life aboard CIEL in this dystopian future world. Sometimes the prose is in first person. Sometimes it’s in third. Never does it follow one formatting for any given character, nor is there any rhyme or reason to where or when the chapters jump in the narrative. There is never a chance to get emotionally invested with a character. Not with the time skips, jumping from one perspective to another, and moving from one point of view to the next within that.

What small plot we do have often falls short. Christine, Trinculo, and Jean de Men have the only continuous plot arc throughout the narrative, yet I found it, if not unbelievable, than questionable at best. After finding out that Christine’s birthday is in two days, at which point she will be killed, I assumed that this would influence the plot, but it doesn’t. Christine doesn’t seem overly concerned with her fate, doesn’t try to fight against it, and seems to have little emotion about the ordeal. What she cares about is Trinculo’s upcoming execution which makes little sense for two reasons. The first is the Trinculo was the brains behind CIEL in the first place – surely they would need his assistance at some point within CIEL’s functioning lifespan. The second is that, well, Trinculo’s time is coming to an end anyway, at least if he truly was a school friend of Christine’s like the narrative states. If they were in the same grade, his own fiftieth birthday is also just around the corner. The tension is simply dampened.

Now. Let’s talk about Jean de Men. First, he was a boogeyman. Someone who was feared and all powerful. Someone who had gone mad with that power. We never saw him in person, only learned of him through the dialogue and memories of the other characters. Then, once we do see him, Jean de Men is a deranged lunatic. How he ever managed to get the CIEL colony established and have people listen and obey him is beyond me. He is vile, evil, but in a very cartoon-ish way. Horrific, despicable acts are performed on women in the last part of the narrative. Trinculo undergoes insane torture. Jean de Men is clearly a terrible person. But he does not have the sort of cold, clinical logic of a madman who can make a functioning government do whatever it is he wants. This is merely a mad scientist with a space lab.

The violence against women in this novel is egregious. It’s horrific. It’s ghastly. But only for the sake of being horrific and ghastly in order to prove a point. It wasn’t needed. Do be warned if you don’t want to read about this.

Look. If this was a narrative that started early in Joan’s life, or at the point when Christine and Joan meet, perhaps I’d have a different viewpoint. But we don’t get to see these characters evolve. We don’t get to experience love and loss with them. We don’t get to see a changing, doomed planet through their eyes. We are merely told about it secondhand, expected to imagine all the juicy bits, all of the character development, all of the important events that made these people who they are. We are just supposed to accept that and focus on what the text is trying to tell us about our world, environmentalism, and the rest. I’m not adverse to a point being made in a novel. Hell, most of speculative fiction includes this to some degree. But there is no tact here, no story, nothing engaging or memorable within the text. Sure, the author can sound poetic at times. But waxing poetic does not make something memorable or enjoyable in and of itself.

The Book of Joan doesn’t wander into the realms of absurdist literature, or weird fiction, or any of that ilk. It is simply poorly plotted. At times the language can sound poetic. At others it is simply in need of an editor. The metaphors and similes especially suffered, trying to use language that either made little sense or beat the reader over the head because it assumed they wouldn’t otherwise understand the point. I can’t really recommend this book unless you’re curious and want to check it out for yourself. But it was not a novel I will be revisiting in the future.