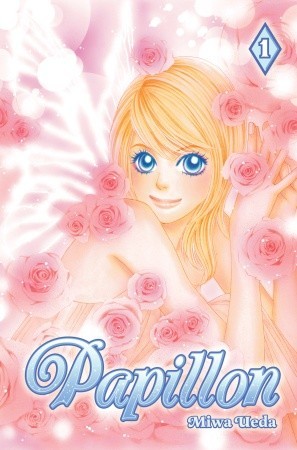 
I won’t lie. I originally checked this book out of the library simply because the title matched the name of Papillon, my favorite villain from Buso Renkin. (What can I say? I like my 90s shonen anime.) Of course, this is a shojo manga, so I wasn’t expecting anything remotely similar to Buso Renkin. But I wasn’t expecting to dislike Papillon Vol 1 by Miwa Ueda even half as much as I did.

This manga is about Ageha, the nerdy half of a set of twins. She has glasses and few friends. Her twin sister is the school beauty, always with a boyfriend, always swooned over by the boys, and an idol to all of the girls. When she realizes her childhood friend, Ryuusei, also goes to the same school, she can’t help but fall for him. But what happens when her sister tries to steal him away from her?

At best, this plot overused. At worst it is downright problematic, okaying behavior that should not, under any circumstances, be okay. But before I go in depth into the extremely problematic lessons and occurrences in this manga, let’s go through the general quibbles of English translated manga in the early 2000s, shall we?

The first page of Papillon is a well written piece explaining Japanese honorifics, why they are used, and what different honorifics mean. This also states that the publisher always keeps the honorifics in the text. Except, they didn’t in this case. I only found honorifics used twice. Once was when a nickname from when Ageha and Ryuusei were children was used (think Kacchan from My Hero Academia). The second time was on page 118 referencing Hana, Ageha’s twin. Why only use honorifics twice when the publisher made sure to say that they would be used constantly? Who knows. Maybe it was for the same reason they didn’t bother translating the preview for the next volume. These are the sorts of translating faux pas that, while certainly not acceptable, are unfortunately not very unique. At least, not in this time period. They weren’t shocking, and while they do frustrate me to no end, they certainly don’t make me dislike the manga.

The relationship between the twins is bad. Very bad. Our main character was raised by her grandmother in the country while her sister was raised at home with their parents. Why? The manga doesn’t say, though there are hints at some later reveal of a probably tragic family story. Despite Ageha wondering if she would be like Hana if she had also raised by their parents, there isn’t any sort of meaningful discussion or glimpse into nature vs nurture, despite having the perfect set up. Not yet at least.

What it does go into is how the girls are petty and cruel. Not only does Hana try and succeed at stealing away the boy Ageha likes, but the only other girl she is friendly with stabs her in the back and shows an embarrassing picture to all of her classmates. Enemies are made. Friends are made. And our meek protagonist learns the most important lesson of all – if only you let some friends give you a makeover and change everything about yourself the man of your dreams will surely fall for you.

What a terrible lesson to teach teenage girls! On top of that, it doesn’t make sense within the context of the story. When Ageha and Ryuusei were friends, Ageha was a tom boy, not dressing in skirts and acting extremely feminine. It would make more sense for Ryuusei to be interested in her when she’s herself, not some reflection of her sister. Speaking of Ryuusei, he is just as shallow as the rest of the characters. To go from not liking someone at all to dating them less than twenty four hours after speaking to them for the first time? Just a bit on the unbelievable side.

But as terrible as these morals are, they aren’t the worst part of the manga. Nope. That comes in the form of Kyuu, an odd but probably sort of harmless man in a horse mask introduced in the first chapter. When we first meet him, Kyuu seems strange, but tries to push Ageha in the right direction – to not be afraid and to go out and seize her dreams. By the next chapter he’d groped and generally harassed her. A standard manga and anime trope, right? We just have to sort of live with it, right?

Turns out that Kyuu is a guidance counselor at school. Not only is he groping and harassing someone, but it’s a grown adult doing so to a student. This is just utterly inappropriate. It isn’t funny. It isn’t any sort of fan service. It’s wrong. Because you know what? It’s scary when it happens.

You see, my high school guidance counselor really did sexually harass female students at my school before being carted off to prison. And while I was never a victim, this hit much too close to home. It’s not alright to show a teacher, let alone any adult, harassing a student, especially when the plot of the manga (or anime, or novel) isn’t about catching the perpetrator. This isn’t okay to show. It isn’t funny. It’s not fan service – certainly not acceptable fan service.

This was my very last straw. Whatever sort of vague interest in Papillon I had vanished. I didn’t want to see if the characters got their acts together or if the messages told in the text ever went beyond ‘if you’re pretty, boys like you’. I just don’t want to look at it anymore. At least, not right now.

I will certainly not be reading the rest of the Papillon. It is a manga that is clichéd and trope filled at its best. At its worst it perpetrates terrible stereotypes about female relationships, beauty, and romance while creating an air of acceptability around adults harassing students.