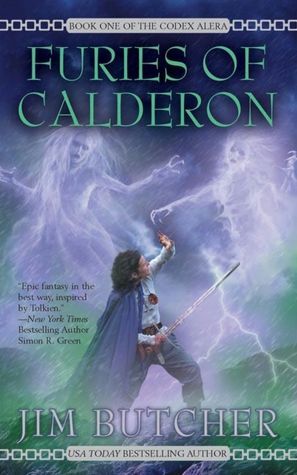 
First of all, apologies to anyone who might have wondered where I’ve been. Between commuting and health issues (migraines) I’ve found myself unable to do much reading and even less work on the computer when I’m home because my brain simply would not allow it. The way around this-audio books! I swear, as time goes on this medium has kept me going and enjoying my time without straining my eyes and brain which is a great relief. Now, onto the reason we’re all here – THE BOOKS.

The first book in the Codex Alera series, The Furies of Calderon, is, quite simply put, an amazing way to kick off a series. As with many of Jim Butcher’s works we get a feel for the characters, their lives and the world they live in without to much telling but with plenty of showing. This is perhaps one of the reasons Jim Butcher is one of my favorite authors of all time. He gets it right. Every. Damn. Time. Especially, like with this installment, in the first book to hook you in and keep you there.

What’s so great about this book and, overall, this series? Let me tell you about it. Think of other high fantasy series you love (A Song of  Ice and Fire, The Lord of the Rings, etc) and realize that Jim Butcher’s tale of the boy Tavi, the Cursor Amara,  and everyone else we meet hits all of the greatest points found in the other amazing series.

In Alera there are elemental forces called furies and the people of Alera can control these creatures through magical forces within themselves. As with all magic in any world ever people have varying levels of power. In Alera the high lords are people with great amounts of power (and wealth) and everyone else is beneath them in status. The one difference we see with power is found in the character Tavi who, at the age of fifteen at the start of the series, has no fury crafting abilities. He is different. He is incapable. He is a freak.

However, Tavi isn’t completely helpless. Spending so many years being raised by his Aunt Isana and Uncle Bernard (his mother and father having both died) has learned many skills and his wit is beyond measure (a Ravenclaw, for sure, in my opinion)as he navigates life as an outcast while looking for a future for himself in the world. It is his ability to succeed without any fury assistance that will make Tavi a hero and show many people exactly why he is a force to be reckoned with.

On the other end of the skill spectrum we see Amara, a Cursor who, in the first book goes through many heart-wrenching and life-changing issues as her mentor, Fidelias, reveals himself to be a traitor to the crown. Amara, loyal and a strong wind-crafter, escapes from capture to the steadhold of Bernard (with Tavi’s help)and it is here she works with Bernard to help the First Lord as the traitorous plots taking place around all of Alera begin to come for his life. Meanwhile, Isana, captured and held in precarious circumstance, shows the true nature of a good person as she escapes, bringing along another captive who had previously tried to kill her. (I, for one, know I wouldn’t be a good enough person to rescue my former attempted assassin).

Beyond the characters and plot points discussed above it is worth saying that this series touches on many improtant things (racism, slavery,  war, etc) and does so within the confines of the world we’re reading about but reminds the reader of how to be a better person without beating the idea like a dead horse. As other races and types of people are introduced in the series we see that Tavi, the one alienated by his own people, is offered respect based on his own merit and not what his society judges to be the most important. Ther Marat people value good and brave acts over anything else and, as they do not use furies, they can see Tavi’s actual worth and bravery without judging him. When a book offers me a great cast of characters (both hero and villain alike), a fantastically built world, spies, intrigue, multiple plots that tie together in a greater picture, it’s easy to keep me coming back for more.

And, as with most of my reviews of books by Jim Butcher about here is one of my favorite quotes from the book.

“Tavi looked wildly around the courtyard, and when his gaze flicked toward them, his face lit witha ferocious smile. “Uncle Bernard! Uncle Bernard!” he shouted, pointing at Doroga. “He followed me home! Can we keep him?”

And, if the above isn’t enough to pull you in perhaps the following will help. Apparently (and I cannot verify at this time) Jim Butcher made a bet he could write a fantasy book based on Roman legions and Pokemon. Yes, you read that correctly. If the Codex Alera does come from this book I applaud Jim Butcher and whoever bet against him. To the losing party I’m glad you lost because as evidenced from this series, the rest of us won.