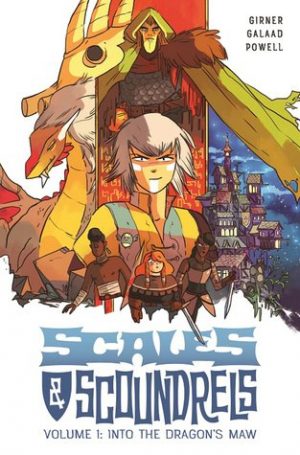 
I love fantasy stories. So it isn’t any surprise that I picked up the latest fantasy graphic novel, which hit shelves today, February 13, 2018. Scales & Scoundrels Vol. 1: Into the Dragon’s Maw by Sebastian Girner and Galaad is a delightful fantasy perfect for people of any age.

The story is about Luvander, a woman living in a medieval fantasy world. Her goal? Get rich and have piles of gold. But the truth of the matter is that she’s dead broke. After saving a group of travelers from a group of bandits, she finds herself included in their journey as they search for adventure, fame, and riches in some mysterious ancient ruins, the depths of which no one has ever seen.

This graphic novel was just pure fun. From the story to the characters to the art, it was just wonderful all around. Now, the overview of the plot might seem a tad generic – a ragtag group of adventurers goes on some kind of a quest. And, yes, that has been done before in many different mediums. But this one stands out. It does everything right.

The cast is a diverse one, which was really wonderful to see. Prince Aki and his shadow, Koro, are both POC, coming from an empire far away. Three out four main characters are female. The characters are bold, each with their own motivations as to why they have agreed to this journey. They mesh with each other very well, with some great banter, but they also have their disagreements and don’t always fully trust each other. While journeying together largely because Prince Aki has asked for their assistance, each character has their own motive for going to these forgotten ruins. Side plots begin to develop, the story being more than a simple adventure for the sake of adventure that it seems to be.

Luvander was an interesting main character. She is strong, a fantastic fighter, and has a great sense of humor. Yet there is a mystery about her. Abilities she has aren’t fully explained, kept largely hidden from her new companions, and there’s a wanted poster out for her head to boot. I also particularly liked the prince, a character who could have come off as particularly naïve yet didn’t. Prince Aki is kind, a student of history, and trusts a little too easily. Yet, while he comes off as naïve at times, he is fully aware that this journey is the last chance he will ever have to do something for himself without putting his people and his kingdom first.

The world the story is set in is a standard fantasy realm in many ways. There are elves and dwarves, ogres and goblins, some of which are seen and others merely mentioned. Yet, this is a fantasy world with some wonderful quirks. I love how the card game being played in the opening of the graphic novel isn’t anything which uses regular playing cards, but something more akin to Magic: The Gathering. I haven’t really seen this concept outside of the Witcher video games, but this both makes sense in some ways and is quite entertaining. I also really liked how the ruins were depicted. They remain an unknown, but they aren’t necessarily dead. There is evidence of past explorers and of their demises. While the original occupants are long gone, things have still made it home.

Smaller details take this graphic novel from good to great. Having a flashback rendered in black and white instead of the bright colors the rest of the story uses was extremely clever. When characters speak to one another in a different language it is not depicted in italics or within brackets, which are the ways most usually seen. The speech bubbles instead show the symbols of this other language with the actual text in text boxes beneath it. Not only was this differed than normal, but it reinforced the scene excellently as well. It really felt like the characters speaking were using a language completely unknown to the others and were both of a species that they’d never really seen before.

The art is bright, and bold. The style the characters are drawn in was fun, if lacking in some fine detail. Scenes set in the dark, where no light can be found at all, were rendered as cells of pure black with nothing visible at all as opposed to a palate change of darker tones which many graphic novels tend to use. This added to the atmosphere of the story wonderfully.

Volume 1 does end with a bit of a cliffhanger. There are still plenty of questions to be answered and lots of adventures to be had. I am most definitely going to be continuing this series, and I honestly cannot wait for more.

Scales & Scoundrels Vol. 1: Into the Dragon’s Maw by Sebastian Girner (writer) and Galaad (illustrations) is a fantastic new fantasy series that everyone should read. If you enjoy fun fantasy stories, definitely go find a copy. It will not disappoint.