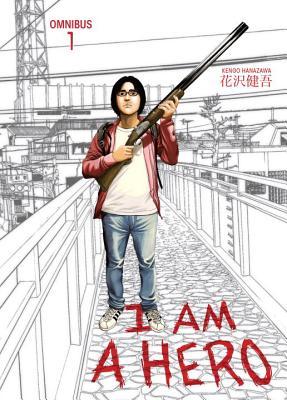 
Zombie stories is a hit or miss genre for many people. Perhaps this is simply due to oversaturation; it isn’t as if zombie novel, anime, manga, or movies are in any short supply. Yet, one such zombie stories I have heard nothing but praise for is the manga series I Am A Hero. I Am A Hero Omnibus Vol 1 by Kengo Hanazawa is a slow, careful look at and the events that set off an outbreak of a zombie virus.

This story centers around the outbreak of a zombie virus and the apocalyptic situation that soon arises. The main character is Hideo, a manga artist living in Tokyo. He’s more than a bit mentally unstable, and recluse. Yet, he also has a great advantage – a real firearm. Trying to stay alive and figure out what is going on, he repeats his mantra over to himself – I am a hero.

Hideo, the main character, is not someone who I would call ‘normal’. He has some issues that he’s dealing with when the story opens. Panic attacks are common for him, and he is shown. He talks to himself, sometimes in his head, sometimes out loud. What he can admit to himself, he can’t always say out loud. And, sometimes what he talks to isn’t always there. He has delusions – imaginary people talk to him, comment on things. If you’ve seen or read the anime and light novel Welcome to the NHK this would be familiar. Instead of the household appliances speaking to the main character, fueling his delusions and fears, it is seemingly real people who simply don’t exist.

This puts Hideo in a very interesting position, though. This is a man who is extremely careful in just about everything that he does. He is a recluse, working late into the night with his coworkers, and doing nothing more than migrating between his own apartment and the apartment of his girlfriend. He’s safer from a zombie outbreak than most others who live in a big city simply because of this. But this also means that he isn’t as connected to society as other people. He learns what the zombie virus is a bit later than others. The rest of society has been dealing with this for hours by the time he is fully aware of the situation.

The story takes its time getting into the meat of things. Zombies don’t appear until the latter part of the omnibus. Despite picking up this manga specifically for the horror and zombies, I was perfectly fine with the wait. The stage is set well. We understand Hideo by the time the suspicious, unnerving activity going on in the background takes a more sinister turn with zombies appearing. I Am A Hero is a very physiological story, delving into Hideo’s mind, and the minds of his coworkers as this zombie outbreak begins. This is a large aspect of why the manga works as well as it does. We spend a great deal of time with these characters before real, identifiable zombies appear. We watch as society collapses around this disease, taking others first, but eventually seeping into the closed off world that lives in.

Another aspect that helps this story stand out from the rest of the many zombie apocalypse based stories is its main character. This isn’t a story with amazing teenagers fighting off terrifying enemies or ex-military heroes using their prior knowledge to survive. Hideo is an average person, no different than anyone else. He’s overweight. He’s not particularly brave or clever. He doesn’t have any extraordinary skills. His job and past experience doesn’t make him any better suited to handle the situation than anyone else. He’s easily frightened, and his anxiety runs deep. He doesn’t always take charge in situations, even if isn’t positive those he follows are making the correct decisions. In some aspects he’s less able to handle the situation than many others. Yet Hideo does what he can to survive. Despite his crudeness and his many flaws, there is a sort of compassion hidden within him that only becomes more apparent as the story continues to unfold.

The art in this manga is extremely detailed, and quite beautiful. Color pages can be found in this volume. These colored sections are utterly beautiful. What I enjoyed most about these color images was how the zombies were depicted. It is clear even in the usual black and white images that the zombies are shown a bit differently than normal. These aren’t the gaunt, decaying figures that the word ‘zombie’ typically brings to mind. Instead, they are a pale, pasty white figures, their bodies the same size and shape as they were in life. Their veins stand out against their skin, blue lines unnaturally. They’re different, and terrifying.

I Am A Hero Omnibus Vol 1 by Kengo Hanazawa is one of the greatest horror manga currently in production. This is what every zombie apocalypse tale aspires to be. If you are a fan of horror, zombies, or apocalyptic tales I would highly suggest giving I Am A Hero a read.