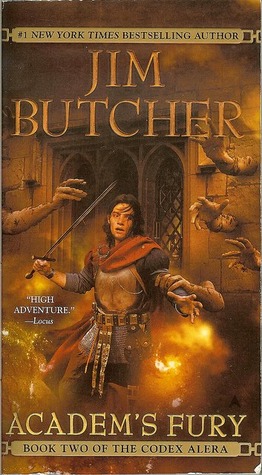 
Back to the world of Alera we go! For anyone following along, book two doesn’t disappoint and only continues to build the series. We see character development and an increase in the danger for the characters as well as small, subtle budding romances that don’t take over the books but add to them. I’m sold!

Right from this start the book has a faster pace which I know for some people might have been frustrating in book number one. If that was your complaint previously, please go ahead and start this one because you will not be disappointed. Also, knowing a bit more about the world from book one there is even less telling about the world here and the focus becomes the plot rather than explaining and introducing the world.

We return to the world seeing Tavi, now a student at the academy, his patron being the First Lord, as he struggles to learn despite still not having furies to control. However, Tavi once again proves his capability as he uses his mind and continued progress as an overall person to show that being different doesn’t change how effective he can be. We also see Tavi’s friend, Kitai (the Marat girl from book one) return and their banter and chemistry continues to be one of my favorite parts of the series.

Speaking of the Marat we see Doroga go to Bernard, Isana and Amara and warn them of an ancient threat called The Vord. The best way to explain the Vord is that they are like the Yeerks from the Animorphs series or, another way, is the body snatchers. Parasites that invade the mind of the people they take (hence the nickname the Taken) the Vord are capable of breeding quickly and taking over quietly. Isana heads for the capital to alert the First Lord of the new danger while Amara and Bernard (who are falling for each other more and more as the time has passed and are carrying on a mostly secret relationship) battle through the lands of the valley to try and save their fellow Alerans from the Vord.

We see just how difficult and confusing the politics and intrigue in Alera are as Isana is lead through society by a courtesan and a retired legionnaire while she attempts to gain an audience with the First Lord. Of course, she and the pretty much the rest of Alera are unaware that the First Lord, Gaius Sextus, is in a coma after stretching his crafting abilities to the limits. The only people who know he is sick are Tavi, Sir Miles and Max. The three struggle to present Max (using water crafting abilities that change his appearance) as the First Lord and prevent civil war.

While the Vord attacks and Isana is captured we learn of the many High Lords and Ladies throughout Alera that are plotting to overthrow the First Lord as he is without an heir, his son, Gaius Septimus, having died in battle years ago. With succession being a point of contention many people are looking to take over Alera and again Tavi, his friends and family are the only ones working to protect the world as they know it.

We see a lot of character development in this book, across the board. Bernard, Amara, Isana, Tavi, Gaius Sextus and even Max and Ehren grow and change throughout this book, setting them up for their futures outside of the Academy. Most importantly we see Tavi continue to accept himself and grow to learn that furies aren’t everything and that he himself is more and more valuable as a person, not just as a failed crafter.

And, as with most of my reviews of books by Jim Butcher about here is one of my favorite quotes from the book.

“It gets too hot in there after a long test,” he told Ehren. “The air gets all squishy.” “It’s called humidity, Tavi,” Ehren said. “I haven’t slept in almost two days. It’s squishy.”

So, as you can tell from my rating and the above discussion of the great points of this book I’m still hooked on the series. You can expect me to get through all of the series and review each book in turn. I personally think people who enjoy fantasy are missing out if they do not pick up this series.