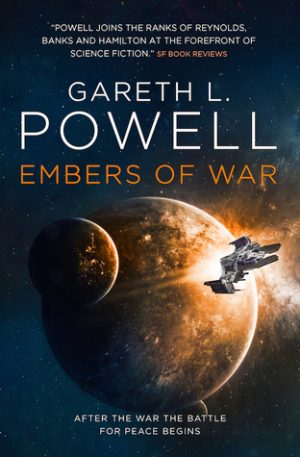 Embers of War follows the ship Trouble Dog and her crew. Once a battleship, Trouble Dog is now a rescue vessel, both the ship and her captain, Sal Konstanz, making up for the atrocities they witnessed and participated in during the war. Now they belong to the House of Reclamation, an organization dedicated to the rescue of ships that have crashed, are stranded, or in some kind of distress. When a ship filled with sightseers goes completely offline it’s the Trouble Dog’s duty to go to its rescue. However, what appears to be a straightforward mission proves to be anything but.

The point of view follows several characters, including the Trouble Dog herself. Each chapter changes the viewpoint to a different character. Every voice is distinct. Other novels with multiple viewpoints, especially those with so many different viewpoints, can become a bit bogged down with voices blending together, one never being very distinct from another. This was not the case in this book. Each character has a very unique voice. Each feels like a real person, and I truly cared about each one of them.

I was very, very impressed with the characterization within Embers of War. Every character was fully developed. They had very real hopes, dreams, and fears. The horrors of past wars that ravaged the galaxy took a very real, very deep toll on many of the characters. Old loyalties and rivalries complicated both relationships and ongoing developments.

I especially liked how Nod, one of the Trouble Dog’s crew, was introduced and treated. Nod is an alien, extremely different from the mostly human cast. Yet, the characters never stop and dwell on his strangeness or alien-ness nor do they carry on about how they are so very different, but came to understand one another anyway. Nod simply is. He’s simply another of the crew. And yet, Nod retains his differentness. He is clearly extremely different from a human, and that is apparent in both his speech patterns, thoughts, and even his post aboard the ship.

The universe Embers of War is set in is very rich and detailed. Though we don’t see an overabundance of the universe, it still feels vast and filled with life. Multiple systems are spoken of if not directly seen and bear a wealth of planets, peoples, and ways of life. Wars have been fought and won and lost and simply given up on. Humans are newcomers here. Plenty of lifeforms have conquered the stars already, some of whom are now no more than memory. This is most directly seen by the Gallery, a planetary system where each planet was carved into a sculpture. The true purpose behind these objects as well as their original creators are mysteries lost to time. Now, the Gallery serves as a tourist attraction.

Something else fascinating was the ship itself, Trouble Dog. Much of science fiction has AI’s with personalities, maybe even a bit of autonomy. But none of them are anything like Trouble Dog. Here, an extremely advanced AI is combined with human stem cells and some canine DNA. She has a personality, and in many ways is the true main character of the story. I found this fascinating, and I loved what the author did with it. While Trouble Dog has a personality resembling a human’s she is clearly not human, something that is the most apparent in battle.

The book wrapped up extremely well. There was not a stray subplot to be found. All of ht dots connect, even if it’s unclear how at first. Everything came full circle. Things that could have easily been included only for world building had very a real purpose, and a direct impact on the plot. I really enjoyed the ending. The Trouble Dog is clever, much more so than any human could ever be, and it showed. While some might say that the ending began treading on deus ex machina territory, I would have to disagree. I think it’s very tightly plotted with more than enough hints and discourse dropped throughout the book to not feel odd or out of left field.

I absolutely loved Embers of War by Gareth L. Powell. Weeks later I still find myself thinking about it. The next book in this series cannot come fast enough. I’m in it for the long haul with this series. I highly recommend this book. It is not a book you want to miss.