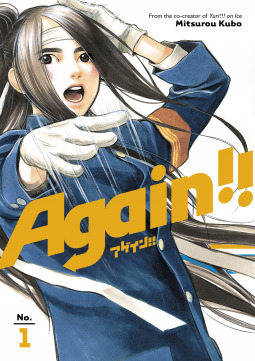 The story is about Kinichiro, a high school student with no friends and no ambitions. When a misunderstanding leads to the accidental death of both Kinichiro and Akira on their graduation day, they find themselves waking up to the first day of high school. Armed with a second chance, Kinichiro decides to change his high school experience. The first difference? Take the enigmatic captain of the ouedan club up on her offer to join up and save it from the quiet death it suffered the first time around.

Certain things might seem rather typical of a high school based sports anime at first glance. However, all of the common tropes have wonderful twists to them and are treated with much more care than usually seen. For example, the very common ‘girl runs away because she mistakes a generally kind male character for some kind of a pervert’ takes a dramatic turn when, in her panicked fleeing she falls down the stairs and dies. A bit over the top, perhaps, but this was completely unexpected and very funny.

The main character is also not the only character who goes back in time, nor is he the only one to remember what happened. Akira also finds herself back in time. More than that, they actually talk about this. Kinichiro doesn’t automatically believe that he’s gone back in time, but instead believes everything is a dream. This fades as more time goes on, solidifying only after he talks with Akira.

For Akira, things don’t seem to be going quite as well as last time, let alone better, unlike Kinichiro. She doesn’t come across as mature as Kinichiro, and she certainly doesn’t think things through all the time. Just as she assumed Kinichiro was up to no good and frightened herself to the point of dying while fleeing, she assumes that she and her boyfriend will just pick up where things left off despite the boy dating someone else and not being so much as friends with her. Just as we get a chapter from Kinichiro’s point of view outlining their last day of high school and ensuing time traveling, we get a chapter of the same for Akira. This was admittedly necessary. It added a second point of view with a completely different outlook on the situation. It did slow the story down a little bit, but having scenes repeated was, again, necessary.

Kinichiro does act more mature than the majority of his classmates. While this is expected as he’s now a good three years older than the others, it isn’t something that is always depicted, or depicted well, in other similarly themed manga. Kinichiro also acts more mature than his younger self, making choices that are quite different from what occurred the first time around. He is less quick to anger and self-defense in the presence of teachers. An active effort is made by Kinichiro for a better high school experience. Yet, his personality doesn’t undergo a major change from the first to second chapters. He remains the same in many ways. Despite actively trying to portray a better image of himself and become more involved in school activities, he still remains shy. Kinichiro might agree to have lunch with other people and really enjoy the time he spends with them, but he doesn’t actively reach out himself.

Something that’s touched upon in this manga is passion and the lack thereof. Kinichiro acted like an observer in his own life, never making the effort to join clubs or make friends, merely going to class and going home. Both teachers and students find this odd, strange, and further ostracize him. Everyone comments on how he doesn’t have friends and doesn’t try. The captain of the ouedan club is, in many ways, Kinichiro’s opposite. She cares about ouedan a lot. For that passion she is also ostracized, with no one joining her club. She is too intense. She cares too much. This, I find, is quite true to life. Don’t care enough and you’re liable to be ostracized. Show too much passion and those same individuals might also have a problem with it. Sometimes it feels as if you can’t win no matter what you do, and I think a lot of people can relate to this.

As much as this is a manga about sports, we don’t see too much of ouedan in this volume. This is also a story about the characters, their lives, and their passions or lack thereof. The ouedan club is on the brink of destruction. Other clubs are out for its blood. Past actions no one talks about hang over the characters, though they are still shrouded in mystery.

The art can be a bit simplistic yet it is very beautiful. Backgrounds aren’t always extremely detailed, sometimes with nothing but white space behind the characters. However, the art does some rather interesting things. There are sections where the art breaks out of the panel, such as the ouedan flag reaching across the page. Images of Kinichiro, larger than the other cells, watching events unfold before him are quite telling. Not only does it highlight his passiveness and background seat in his own school life, but it also demonstrates how he’s watching everything occur for the second time, almost as if he’s watching a film.

At the end of the volume is a notes section. The majority of the notes are explanations of cultural terms that readers might be unfamiliar with. Most importantly, it gives a good overview of ouedan, something that many western readers probably won’t be very familiar with. Unlike most of the notes and translation explanations I’ve seen, this one includes the respective cell or cells of the manga along with the notes. Most often there is simply a page number included, forcing the reader to flip back and forth between the manga section and the notes section. Though it takes up more physical space, I really liked having the image present with the notes.

Despite having some issues with the early pacing of the manga, I very much enjoyed Again!! Vol 1 by Mitsuro Kubo. If there was a second volume available I would have just kept reading. This is a good high school slice of life manga. It’s also shaping up to be a good sports manga that is very focused on the characters, one of the biggest pro’s for Kubo’s smash hit anime Yuri on Ice. I will definitely be reading more of this manga.