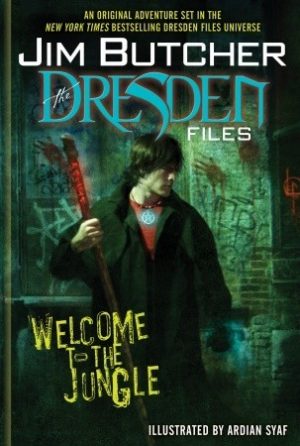 
I’ve been a fan of the Dresden Files since the series early days. I have all the novels lovingly sitting right next to my Harry Potter collection. (Look, having all the fantasy books with protagonists named Harry together just makes sense to me). What I don’t have are any of the assorted graphic novels. Recently, I picked up a copy of The Dresden Files: Welcome to the Jungle by Jim Butcher and Ardian Syaf.

The story is about Harry Dresden, wizard and go-to person for all things supernatural in Chicago. This time he’s called in for a death at the Lincoln Park Zoo. A security guard was found mauled to death, with blame immediately being placed on the zoo’s guerilla. Harry is then called in to figure out who or what actually responsible for the death.

I wasn’t sure what to expect going into this. Graphic novel tie-ins, whether they be canon to the series or not, have disappointment in the past. I was very pleasantly surprised to find that Welcome to the Jungle felt exactly like a Dresden Files novel. Like so many of the novels, it was just fun. Harry Dresden was the same old Harry we’re used to. His personality hadn’t suffered. His catch phrases were all there, but never overused.

The story isn’t a terribly complicated one. There are not any unforeseen twists and turns as can be found in the novels, particularly some of the later ones. Yet, it doesn’t need them. The entire story fits into a single graphic novel, which is very appreciated. No need to wait for the end of the story in the next volume. It’s all here.

While the front cover may not be indicative of the sort of art within the graphic novel, it does match the front covers of the novels perfectly. This is both unexpected and appreciated from a collector’s point of view. Many series don’t seem to stick to one theme for its covers across a mere three novels let alone a very long running series in addition to its related graphic novels.

The art is bold. Color pallets change completely depending on location and time of day. However, I did find some of the character’s facial expressions to be rather static. A lot of the same hard, slightly grumpy faces were used. Perhaps it’s simply because I am used to the often overly expressive nature of manga, but the characters did feel a bit stiff visually speaking.

However, I can’t help but feel that the art was not used to its full potential. A lot of information was conveyed through narration, not dialogue between characters and not through the art itself. Certain sections got a little wordy when a change in expression and some basic body language could have evoked what the text explained. Still, the art was very nice, and I enjoyed the story as a whole.

Still, this was a fun story set in a great series. Welcome to the Jungle by Jim Butcher and Ardian Syaf is a good edition to the Dresden Files. If you are a fan of this series, I do suggest to give this graphic novel a read if you haven’t already done so.