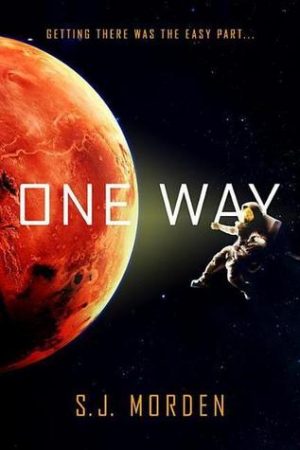 One Way
By: S. J. Morden
Release Date: April 10, 2018
Publisher: Orbit
Received From: Publisher
(All reviews are our own, honest opinions.)
Rating:


Murder mysteries set in space is quickly becoming a subgenre I never knew I needed in my life. After reading Gunpowder Moon by David Pedriera, I knew I needed to read One Way. One Way by S. J. Morden, a fast paced near future science fiction murder mystery story.

One Way is the story of Frank, a convicted criminal imprisoned for life for the murder of his son’s drug dealer. One day, a deal is offered. Come and work for them and he’ll be free, in a sense. People are needed to build the first base on Mars ahead of the arrival of the NASA scientists. In exchange for his work he’ll be allowed to live on the base for the rest of his life – not quite free but not imprisoned as he would be on Earth either. Unfortunately, nothing is ever that simple. His fellow convict builders begin to die one by one almost as soon as they arrive on Mars. There’s a very limited number of people it could be, and all of them are trapped far away from help.

The story is told from Frank’s point of view. The pacing is pretty quick with a heavy focus on back and forth dialogue, which definitely pushes the pacing faster. There isn’t always a lot of descriptive paragraphs in the novel, largely due to writing style. When there is a description of the scenery it is often included in very interesting, very memorable ways. A scene that stuck with me was Frank describing the Mars terrain over the coms system, in part as a method to calm himself down in a stressful situation. This was rather unique, and didn’t break the writing style in order to deliver some great, memorable description of this alien world.

The characters were fun to read about. I liked the back and forth dialogue, and found several of them rather interesting. Yet, not much is known about their pasts. The crimes these individuals were incarcerated for aren’t always stated directly, instead being guessed at by Frank or the other convicts. This does lead to some of the deaths, particularly the first ones, not being as heavy hitting as some of the later deaths, but that is to be expected.

Frank goes from being a more passive observer of events around him to being a very central figure within the mystery. I didn’t always understand Frank’s thought process, especially in the beginning of th story, but he was fascinating to read about. The strong personality seen in the very first chapter of the novel when Frank first meets Brack isn’t seen again until around halfway through the novel when characters begin dying in earnest. Frank keeps his head down, for better or for worse, in order to get to Mars. It is only when he arrives and his companions being to disappear one by one that he pushed to do more, to take a direct stand against the mysterious goings on and try to find who the culprit is before it is too late.

This book ended on a fairly complete note, wrapping up rather nicely. However, there is room for more story to come, and it does look as if this is going to become a series. Even so, if you’re looking for a standalone sci-fi novel to read, I think this would fit the bill. It has a beginning, a middle, an end, and doesn’t leave off on the equivalent of a page turn or chapter end. There is more story to tell about Frank’s time on Mars, I think, but what is here is fun and more than enough to satisfy anyone’s palette.

In all, I would suggest reading One Way by S J Morden. It’s an interesting take on a near future we might conceivably see in our lifetimes combined with a murder mystery story in the same vein as And Then There Were None by Agatha Christi. If you like near future science fiction, stories about Mars, or mysteries this is a book you’ll want to check out.