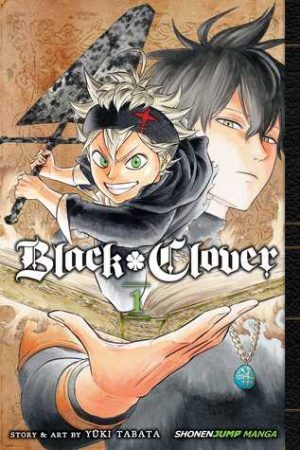 
Lately I’ve been trying to read all of the manga that have been sitting on my shelves unread for months (or longer). Shonen Jump titles come first as it doesn’t make sense to only be reading half a magazine every Monday. So, today we’re taking a look at Black Clover Volume 1 by Yuki Tabata.

Black Clover is a fantasy shonen series that follows Asta, a fifteen year old orphan who is determined to be the wizard king. Of course, that’ll be difficult seeing as he can’t actually use magic. Along with his childhood friend, Yuno, he embarks on a journey to become a knight and, eventually, the Wizard King. This is the classic story of the underdog, the story of a boy who is apparently powerless in world where everyone has magical ability and power is everything. It is a story of friends, rivals, with the same goal who will inevitably clash at some point on their parallel journeys to become king.

One of Black Clover’s biggest positives is its pacing. The first volume moves, covering what would normally be multiple volumes in many other cases. What I assumed was going to be set up as a sort of miniature tournament arc was over within a chapter. The fun, but ultimately superfluous material in the small tournament was gone over quickly, or else left out where not directly relevant to Asta. The story never felt rushed, either, merely to the point and never straying from the plot.

Despite enjoying this manga and continuing with the series, I must say that it is very, ah, shonen, shall we say. Character’s appearances and personalities fall well within common shonen tropes. The plot, events, characters, everything are extremely trope filled and stereotypical to the genre. It feels like many things that have come before, and, to be honest, many manga to come.

So why am I continuing with the series? Why do I like it so much?

Honestly, while the entire manga does revolve around shonen stereotypes, it plays them off well.

Black Clover knows what it is. It knows it’s a shonen series. It knows its audience, and caters to their expectations without drawing things out. If the pacing was slower or if the story lost focus with, for example, multiple subplots, I probably wouldn’t have gone out of my way to continue with the story if I wasn’t already a subscriber to Weekly Shonen Jump.

But as it stands, this was enjoyable. Very enjoyable. Yes, it’s fairly apparent what direction the story will take. And yes, we’ve seen extremely similar characters before. Black Clover embraces that, though, and plunges full steam ahead, plowing through what would usually be at least two volumes in many other similar titles, especially older ones. It’s fun. It’s exciting. There’s magic, a medieval styled world, a childhood friend with top tier powers, and a ragtag bunch of guild members that are the epitome of lovable.

I love this manga for the same reason I love so many of the Tolkien-esque fantasy novels. They may be derivative in nature to some degree, or based off of well established genre norms, but it’s done with love, care, and a deep understanding of what works for the genre and what doesn’t.

So, yes. If you like shonen manga and don’t mind the plethora of tropes I’d suggest picking up at least the first volume of Black Clover. It might not be my favorite Shonen Jump title, but it’s certainly very enjoyable. I’m interested to see if this series continues on the same path or breaks from the typical shonen mold at some point. Only time and a significant amount of catching up on previously released volumes will tell.