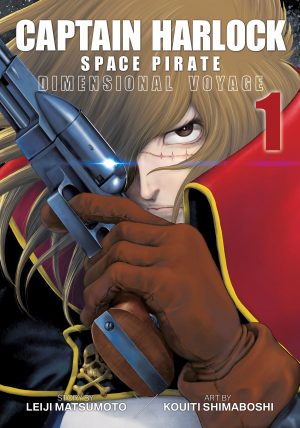 
Captain Harlock Space Pirate: Dimensional Voyage is a retelling of Captain Harlock. Billed as a good place to start from for those who haven’t read the original series, I planned to put that to the test. And, yes, I can say with certainty that this was a good place to start from. While I know the general concept of Captain Harlock, I have not read the original manga, so I was going into this rather blind. I never felt lost or left behind. The manga really does do an excellent job of introducing the world and its character’s to a new audience.

The Earth is a failing planet, a place that is populated only by those who cannot afford to leave, of those looking to lord over their own fiefs. It remains unprotected, its leaders failing them, uncaring and unwilling to listen to the fears of those that strive to save whatever is left from impending invasion from the stars. Tadashi Daiba is one of the few people left willing to sacrifice everything to save the earth. But what can one person do in the face of threats of invasion when the powers that be refuse to give credence to the warnings and do nothing to prepare for the growing threat? You joint the crew of Captain Harlock, of course!

The manga opens with a reporter interviewing various important characters about Captain Harlock, giving the readers who might not be familiar with the series some information about about Harlock, the characters being interviewed, and a basic overview of the state of Earth. This was a good way to introduce a number of characters very quickly and get a lot of world building out of the way very quickly. While this might be a bit slow to start, the action and tension ramp up greatly as the volume continues.

Our main character is Tadashi Daiba, the son of Doc Daiba. It is he who we really see this world from. Tadashi is an young man who, unlike many of the other characters living on Earth, genuinely cares about the Earth’s future. As he learns about Captain Harlock, the threats to Earth, and the flippant attitude of the prime minister, so do we. This was a great way to introduce a well established world to new readers. I really liked Tadashi Daiba. He was a character who’s motivations were easy to understand and was easy to like. But the real star of the show is, of course, Captain Harlock. Captain Harlock is cool. He’s the sort of character who is overpowered, but is oh so much fun to watch. We know he’ll win. We know because he’s Captain Harlock. There aren’t many fight scenes in this volume. But what fighting is included shows Captain Harlock at a tier above most others.

Some interesting themes are explored as well. The prime minister and Kirita depict two very different, very contrary opinions about the potential alien invasion and Harlock himself. On the one hand we have Kirita, Federal Deputy to the Solar System and the Gaia Corporation, an individual who is seemingly very invested in the future of the Earth and dedicated to following the letter of the law. On the other hand we have the prime minister, a man wholly unconcerned with the looming threat who spouts all sorts of nonsense whenever confronted by another on the issue. Some of this nonsense rings true, though. This is an Earth that has been miraculously saved many times in the past, so much as that the PM feels certain that on the off chance something does happen things will simply work themselves out, just like always.

Now, while I like the art style, I do have to say that Daiba does look rather similar to Captain Harlock and his ever billowing locks. There were a few places where this could become potentially confusing to some readers, and is something to note. However, characters are, by and large, extremely varied in design and range from the very definition of bad-ass to the purely comedic.

Overall, this volume largely sets the scene. We are introduced to our heroes and our villains. We learn the state of the world, its ignorance to potential threats, and the utter fear of its citizens in the face of trouble. I want to see where the story goes from here. I want to see might fight scenes and get to know Captain Harlock’s crew better.

There are four volumes in the Captain Harlock: Dimensional Voyage series so far, and you can be sure that I’ll be reading the next three volumes. There is just something wonderful about Captain Harlock, something that simply draws the reader in. I would highly suggest checking out this series. It is a promising start to a new series in the franchise, and one I’m most definitely planning to continue with.