Review – The Rig by Roger Levy 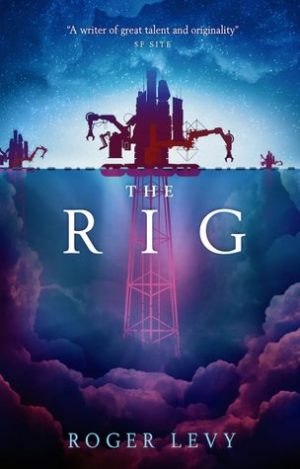 The Rig
By: Roger Levy
Release Date: May 8, 2018
Publisher: Titan Books
Received From: Publisher
(All reviews are our own, honest opinions.)
Rating:


This book took a little longer than I thought it would, partially because it’s a whopping 615 pages long. The Rig by Roger Levy kept me hooked for every single page, though. Even as the days begin to turn to weeks since I’ve finished it the story has stayed with me, and I find myself thinking about it more as time goes on. It’s been some time since a book has stayed with me in quite this way, and I think I might have found a new favorite.

While this is most definitely a science fiction novel that slips into the realms of dystopian, it is much more than that. This is a story about people. It’s about friendship and relationships. It’s a story that is dark and atmospheric. At times it has an almost noir feel. Above all, The Rig is just a fantastic story.

The book is broken up into two main plot lines. One is told from first person point of view and follows Alef from the time he is a boy into adulthood. The other follows three other characters on a different planet within the same solar system and is told from third person point of view, skipping from Razer to Bale to Tallen as required. Despite two very different viewpoints used, the book never feels disjointed. Moving from one chapter and one writing style to the other is smooth, never ripping you out of the story. It works.

I really liked the sections from Alef’s point of view. Those sections were raw, in a sense, the emotion very palpable, which is direct contrast to the character himself who is very methodical and thinks in terms of numbers, not emotion.

Not every planet within the system is spoken about or visited, but those that are seen I found quite different than many in similar solar system spanning tales. The world of Gehenna is one of religion to the exclusion of all else. Immigration to the planet is closely relegated, and modern technologies are largely shunned. The unsaid planet is never named, and never visited, existing outside of the sphere of influence of the system by choice. Each planet we see is harsher and harsher, culminating in the location of the rig, a planet with violent seas, storms, and the unfortunate habit of driving people mad.

The majority of the characters are not wholly good people, and those who do fall more clearly on the spectrum of not having questionable actions or lack of morality are often flawed. They’re not perfect people. They have pasts that haunt them, or vices that plague their steps. They’ve very, incredibly human. They feel real. It is these sorts of characters I like reading about the most.

The two characters who are the most fascinating are the two main characters – Alef and his childhood friend Pellonhorc. They are both very interesting people. The dynamic between the pair and how their relationship evolves over time was fantastic. Another pair of characters with an interesting dynamic were Drame and Legate, two criminal masterminds who are mortal enemies. Their cleverness and intellect is only eclipsed by their hatred for one another. They are a wonderful comparison to Alef and Pellonhorc, acting almost as their foils.

The other characters and second plot line follows Razer, Bale, and Tallen. These three individuals’ lives keep intertwining, sometimes in rather unexpected ways. Chapters following this plot line sometimes tell the story from one of their point of views and sometimes switching from one to another. This section and the city it was largely centered in had a rather noir feel. By and large this part felt more like an older detective story set in a dark city with characters who might not be trustworthy with a character who drinks too much and thinks too much.

The two plot lines run in tandem for much of the book. A chapter from Alef’s point of view is always followed with a chapter from either Razer, Tallen, or Bale’s point of view. At first glance they seemed to have nothing in common, and I was very curious as to how they would eventually come together. Eventually, the reader does find out where they meet, and how the story lines combine. I will not give any spoilers here, but I will say that they were masterfully merged.

The Rig by Roger Levy is a wonderful science fiction story about relationships, friendship, death, and the afterlife. It is a memorable story, one that spans decades, and one which will stay with me for quite a long time. I highly recommend picking up a copy of this wonderful novel. It will not disappoint.