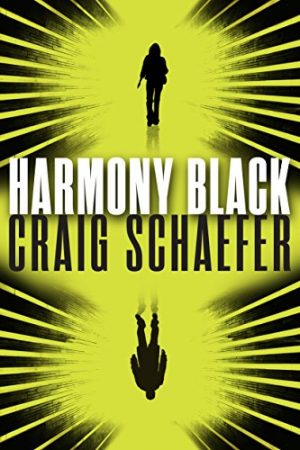 
Am I the only one who likes having books read to me? Am I the only one who misses story time on the carpet in school where all of us as kid would gather and sit, cross-legged to look at our teacher, holding a book and reading aloud to us for those precious thirty-minutes or so?

Maybe I am the only one but I sincerely doubt that, otherwise where would the market for audio books come from? So, with this new book, with this new series I decided to try out the Kindle/Audible combination. And as for this story? An FBI agent who is also a witch, who joins a team made up of various people with even more varied skills and background it was the perfect way to get sucked into a new world.

The book begins with a prologue, five years back right in the middle of Special Agent Harmony Black’s work day where she’s called to her supervisor’s office except it isn’t her supervisor in there. Instead she meets a man named Linder who plainly states “Magic is real. You’re a witch. I carry a demon in my pocket. See? Now we’re on the same page, and you don’t have to lie to me. Saves so  much time. I’m here to make you an offer.”

Color me intrigued. This is in the first few pages of the book. Between the pleasant narration (credit to:Christina Traister for that addition to my experience) and the sharp, quick action and dialogue I was pulled into the book around 1 PM one day. I listened and read along the rest of the day. I was so content and it did feel like I was back in school being read to.

Now, that I’ve finished talking about the joy of having this book being read to me let’s talk about the book itself.

The wording wasn’t fancy but well selected. The characters each had their own voice, vocabulary and quirks with how they spoke (and, in this case, how they were voiced) which I loved.

From there we’re catapulted into the present day (five years later) of the book where Harmony is on a two week vacation from working with Vigilant. Who shows up? Linder. Why? To update her on a few things The first being that a nemesis of sorts, Daniel Faust, is announced dead. You might be wondering why I bring up the announcement of Faust’s death as important when this book and series focuses on Harmony. Well, because Faust is a character from one of Schaefer’s other series and I love the intermingling of characters so I will probably end up reading that series as well.

The second reason she comes back to work early? A baby was abducted (apparently) by Helen Gunderson, the mother of the child. In reality it is done by Hostile Entity 17, as Harmony puts it “It’s the fucking Bogeyman.” Yes, the Bogeyman.

The kicker? Harmony has history with this thing and she has to return to her old hometown to deal with it. As we unfold Harmony’s history, the tragic backstory around her family and about why this revelation would pull Harmony from vacation and back to work we learn a lot about her. During her time working with Linder and Vigilant she was solo, always handled things on her own, every case she didn’t want to be tied down. Now, with this new team (dubbed “The Circus” by Linder) she’s forced to work with others, forced to cooperate and forced to face her own internal demons, as well as the external, physical demons facing her and her team.

The character development, backstory revelations and emerging connections between our heroine and those around her keep the story moving forward without any of it feeling forced. Also, a major plot twist towards the end of the book sold me on the planning that Schaefer does for his storytelling. Which means, with book two hovering in my suggestions page from Kindle and Audible I instantly bought them. So, I’ve now been sucked into a new series and I couldn’t be happier about it. With four books in the series to date I am so ready to get through each of these.

If you’ve read Schaefer’s other work and enjoyed it I’d say you probably will enjoy this series as well and you can bet I’ll finish this series before reading his other works. So far I am enjoying it and with book two being already purchased and in my hands, I’m definitely sold on this character and author.