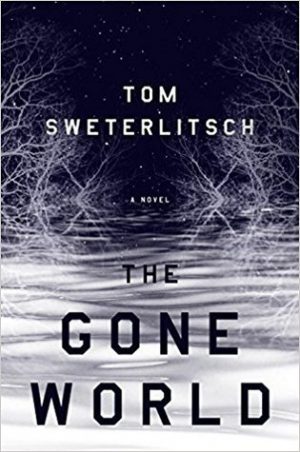 
Telling me there are time travel aspects to a book might be one of the quickest ways to get me to read a book. I’m a sucker for a good time traveling story. And that is certainly a major aspect of The Gone World by Tom Sweterlitsch.

is a thriller, a time travel book, and a story about an impending apocalypse. The main character is Shannon Moss, an NCIS officer who gets called out to a murder involving a navy officer who was presumably lost along with the entire crew of the U.S.S. Libra. The ship is one that travels both deep space and deep time, and deep time tends to do odd things to a person. Shannon is in a race against time to find a missing daughter and a navy officer presumed missing in action while the world ending event dubbed Terminus inches closer and closer with every ship that travels forward in time.

While I’m always up for some good old fashioned time traveling fun, I found the time traveling in order to solve the mystery a little unnecessary, especially for the character’s reasoning. Had Shannon or her boss been more aggressive, proactive investigators they would have found the information they needed regardless of time traveling.

Even so, time traveling adventures are just fun.

The time travel theory this novel uses is the Many World’s theory. At least, it seems this way. The story doesn’t always go into extensive detail it could have concerning the nitty gritty of how their tech or time travel works. This is by no means hard science fiction. It is a thriller first and foremost. However, I would have appreciated some clarification on certain issues. The futures to which the characters travel are possible futures, just one of many. So why do they use all of the information gathered from this possible future as if it is an absolute of what already has and will happen when it is stated that this is simply one of many options? This doesn’t seem to fall within the parameters of most time travel stories inherent rules, and I found myself scratching my head once or twice.

I also had some questions as to what some of the rules for time traveling were. I assumed they were mostly the same as other time traveling fiction, but that doesn’t seem to be the case. There seemed to be no rules on who Shannon could or could not meet in this possible future, nor anything outlining how long she could safely stay.

Yet for all the unanswered questions and questionable decision making of the characters the book moves pretty fast. This remains a fast paced thriller, exploring the gruesome murder of a family that draws the attention of the FBI and NCIS. More than that, it’s a science fiction involving time travel, alien worlds, alternate futures, and the ever impending apocalyptic event Terminus. It’s fast paced, keeping the reader on the edge of their seat for much of the book. It’s exciting, too.

Some of the more technical aspects of time travel are glossed over or not mentioned. While I would prefer to learn more about all of the cool science-y bits, I can understand not wanting to stop the plot completely to explain the nitty gritty of how things work. The larger, more original to this book time travel-y bits are explained. These sections in themselves were quite well explained, not slowing the plot down and making some very interesting points. Yet, Shannon seems to be largely unaware of all of this, which is extremely odd considering that she time travels fairly regularly and her entire profession revolves around it.

Now, there are some pretty graphic, gory scenes in this novel. These occur repeatedly, too. Do be warned if this is something you don’t like. I understand why such graphic scenes were included, but after learning the antagonist’s goals I found the level of utter violence and their motives to not match.

Still, I was invested in the story the entire time, and genuinely wanted to know what happened next.

In all, The Gone World by Tom Sweterlitsch was just okay. While I enjoyed the time travels aspects, the threat of Terminus, and the fast paced thriller sections I did find the characters a bit lackluster and the police search somewhat unbelievable. If you are interested in time travel or apocalypse scenarios I would suggest giving this book a read.