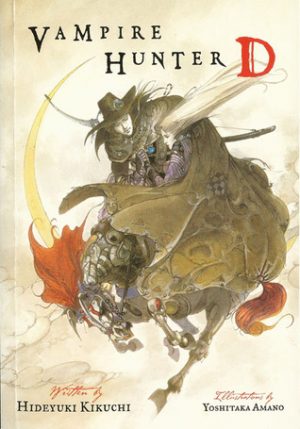 
Fun story. I borrowed a copy of Vampire Hunter D from Hoopla. Since Yoshitaka Amano (of Final Fantasy fame) is the artist, something I was aware of earlier, I assumed this was a manga. Not sure why, seeing as Yoshitaka Amano hasn’t illustrated any manga as far as I am aware. (Do correct me if I’m wrong. I’d love to read a manga he’s illustrated.) As it turns out, Vampire Hunter D by Hideyuki Kikuchi is a light novel! I love light novels!

Vampire Hunter D is set in the year 12,090 AD in a world that is a fascinating combination of high tech future world and medieval fantasy land. The main character is a vampire hunter known only as D. A young woman named Doris challenges him to a duel, and, seeing how his abilities reflect his title, hires him to defeat a vampire lord that has taken residence near the town. This vampire is old, powerful, and has already bitten Doris once. It’s a battle against a vampire, frightened townsfolk, and time.

I really enjoyed reading this light novel. It takes several familiar settings, throws them all into a pot, and mixes it up a bit. This is a post-apocalyptic world, but not one that has completely fallen back into the Middle Ages. Tech is still used. Cars still run, even if they are usually dredged out of museums. There are robots and high tech security. But things of fantasy and nightmares lurk in the shadow parts of the world. Vampires hold onto their waning power with an iron fist, bringing their medieval castles, magic, and other dark creatures found only in myth to the world of humans.

Besides interesting world building, this novel has some very well written characters. Each character has very real motivations for the actions. Doris obviously wants to not be turned into a vampire. The mayor and many of the townspeople are fueled by fear, something that is somewhat understandable, but drives them to cruelty. D is rather professional, here to do a job but truly caring about Doris and her bother nonetheless. Greco is a love to hate character, one of the best examples of this I’ve read in some time. He’s a truly despicable person, but one who has real motivations and though processes for his actions.

Not a lot is revealed about D. What we do know we learn later in the volume, setting things up for some further revelations down the line. He is a very interesting character, one I want to learn more about in the future.

The writing style is from third person point of view, skipping from one character to another as needed. Mostly we see events unfold through the eyes of Doris and D, though. Personally, I really liked the writing style, but there are some lines that are very on the nose or explain things that are usually very obvious to the reader. These parts might not be everyone’s cup of tea, but I never found them annoying or overly used.

The pacing of the story is fast, but doesn’t forgo description, world building, or set up for future events. A lot happens in this volume. To be honest, it kept me guessing, with the story not always going in the direction I assumed it would. I assumed D would be a typical overpowered main character and, well, he isn’t.

I cannot wait to begin reading the second volume in this series. Vampire Hunter D by Hideyuki Kikuchi is absolutely worth reading. It is a fun, exciting read with great characters set in a truly unique setting.