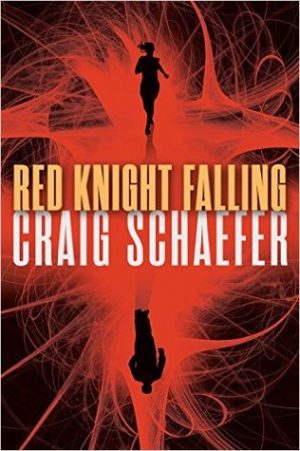 
Back into the world of Harmony Black we go and I am so ready for it. Just like Harmony and her team are ready to take on the next threat to their world I am ready to read about it.

When the story opens we learn of something truly otherworldly (think from the stars) coming to threaten Earth. Vigilant Lock is sent in to track where this threat might land and to handle it. They are given an agent with scientific knowledge to help out as well since none of them are astrophysicists. The issue? There are plenty of other people hunting this falling thing and some of them are ready to kill to get the information needed to find it.

Agent Lawrence unfortunately pays the price and Harmony and her team are left without a scientist that can calculate the area where it will fall. Mission over, right? Wrong. Linder tells them to figure it out and get the mission done despite the fact that they have no scientist and their cover is most likely blown. The answer? Harmony calls on Cody (from the first book) to come help out.

Small town cop definitely doesn’t cover enough about this man as he actually did study astrophysics in college before coming home to help care for his mother and joining the police force in the small town. It may be a little too neat and coincidental for some readers but honestly, I liked Cody getting involved again and was happy to see him show up to help out Harmony and her team. Another interesting moment, Cody learns Harmony is a witch and that Jessie isn’t “normal” either.

Someone I’m not excited to see? A former member of Vigilant Lock, Mikki who is a psychopath and a psychokinetic witch. Why is she back? (Especially since she is supposed to be dead.) To cut a deal with Linder, a witch for hire. Mikki threatens the team though, especially Kevin whom, using her feminine wiles, she controls the poor young man. Mikki and Jessie are at odds and it is definitely not good for Jessie and the team.

Speaking of Jessie we learn a lot more about her and see how seriously she takes her job as the team leader. When we learn of how Mikki had manipulated Kevin Jessie all but shuts down, feeling she failed to protect the youngest member of the team. After a wake-up call from Harmony the rest of the book focuses on not saving just one small town but essentially the entire planet from a super entity, dead set on destroying everything in its path.

The evolution of Harmony’s relationship with Cody, the growth of her connection with her team and further revelations about Linder and the organization the team reports to we see the continued growth of our heroine while the story progresses.

This book serves to firm up the friendships and relationships vital to the series going forward and causes a lot of things to change, for each of the characters so as time goes on things get harder and our heroes are in for an interesting time which means we, the readers, are along for the same, interesting ride.

Side note: Jessie might be my favorite character second to Harmony and only second because I connect to Harmony on the slightly pessimistic outlook on life. Jessie, however, is hilarious, strong-willed and has the best intentions. Serving as the side-kick and comic relief she is vital to my enjoyment of the story.

To summarize, I’m obsessed with these books. If you’ve enjoyed the books I’ve enjoyed… go back to book one of this series  and dive in. If you’re not ready for a witch/FBI agent lead go to book one of the Daniel Faust series by Craig Schaefer (where Harmony is first mentioned) and start there. At the time of this review I have finished the four books available for Harmony Black and went back to the start of it all with Daniel Faust. And I am not disappointed there either. If you want a character similarity to go off of from my past reviews Harmony is the witch version of Karrin Murphy from The Dresden Files. And yes, she is just as awesome.