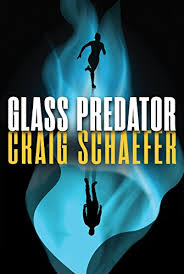 
As with any series, the farther into it we go the harder it is to review without spoilers so read at your own risk.  I’m trying to avoid them I really am but it’s hard to do that when you want to talk about how great the book is.

This one opens on al-Farsi, owner and operator of an intelligence trading operation for the underground who we met in the previous book. He’s being harassed by Nadine, the Matriarch of the House of Dead Roses and she has a bone to pick with him, specifically his relationship with Harmony and Jesse. Turns out she is Nyx’s mother (from book #1). And she is pissed off. As is Bobby Diehl whose plan they destroyed in book #2.

Great way to start things off for our heroine. With Al-Farsi compromised we know life is going to get complicated for Harmony, Jessie and the rest of Vigilant Lock real fast.

Quickly we see the chaos begin when the team is brought in to investigate a bank robbery, pretty mundane, until it’s revealed the robbers are all like Jessie, super powerful, werewolf type creatures that mean business. We also see the return of tabloid junk writer Tucker and body borrowing demon Fontaine. We also so Cody threatened because, as Al-Farsi put it, his clients are Vigilant Lock and Cody isn’t part of Vigilant Lock. (Or, rather, how Al-Farsi is told to put it.)

Jessie and Harmony’s friendship and partnership grows deeper, their loyalty to one another paramount over even their own better judgement but it gives me that warm fuzzy feeling to see two characters bonded so well to each other. It gives me hope that their connection will see them through all the bad crap you know has to be coming for them. And yes, it really does come for them hard in this book. I can only imagine what book four has coming for our favorite duo.

My one complaint, if you can call it that, is that we didn’t get to see (or hear as the book is from Harmony’s POV) what Jessie went through with her family. I also want to know more about her connection to April and the history there as well. I don’t want all the awful details, of course, but I want just enough to be able to understand just a little more of Jessie. Right now I understand a lot about her but I feel like there are pieces missing that would be explained with a big heart to heart conversation or a dramatic reveal.

As the conspiracy unravels and things get more complicated the team of Harmony, Jessie, April and Kevin seem strong enough to handle it. I just hope they are because honestly, if any of them die I will not be happy.

As with every book in the series so far there is balance of serious moments, action, heartbreaking back story, frustration when things go wrong for our characters and comedy. The comedy this time around was forcing Harmony and Jessie to dress up so they could do some surveillance and research on their targets, trying to untie all the knots the conspiracy had caused and honestly, I love how they play on societal expectations and cliches to their advantage. It’s refreshing to see a team work so well together and know how they appear to people around them and turn it in their favor. These are two badass women that use shortsighted views to help their cause and it’s great to see them do it. Honestly, they may be my new favorite crime fighting team (apologies to Stabler and Benson from Law & Order: SVU and Sam and Dean from Supernatural. You just can’t beat two secret team FBI agents that use magic, wolf powers, wit and sarcasm to get through tight spots.

To summarize, I’m still obsessed with these books. If you’ve enjoyed the books I’ve enjoyed… go back to book one of this series  and dive in. If you’re not ready for a witch/FBI agent lead go to book one of the Daniel Faust series by Craig Schaefer (where Harmony is first mentioned) and start there. At the time of this review I have finished the four books available for Harmony Black and went back to the start of it all with Daniel Faust. And I am not disappointed there either.