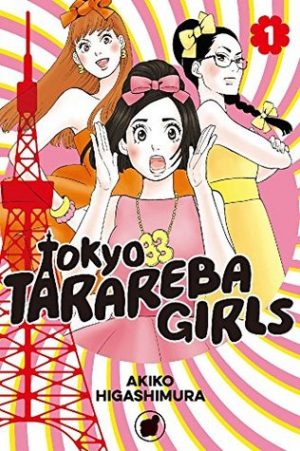 The story is about Rinko, a 33 year old woman who is without a husband. Her days are taken up by going to work, and her evenings with drinking with her friends. When they hear that the 2020 Olympics will be held in Tokyo the friends make a pact – to have a husband by the 2020 Olympics.

Rinko isn’t necessarily a likable character. Things don’t always go her way, but this isn’t always due to the unfairness of the universe or the struggles of adult life. Many of the manga’s events are completely due to her actions or, conversely, inaction. Rinko’s a little selfish. A man’s looks are the most important factor when trying to find a date. She tends to moan and groan and drink with her friends instead of actually trying to remedy her problems.

I tend to love stories like this. A character who may or may not bring their troubles on themselves struggling against, seemingly, the universe. They’re fun slice of life stories with great appeal. However, I didn’t quite enjoy this volume as much as I initially expected. Scenes lingered just a bit too long at times. When there is a lesson to be learned Rinko normally misses it. She never comes to any sort of conclusions or thinks about the situation too hard, even if there is an obvious takeaway from the situation. However, it was certain questionable situations that left a bad taste in the mouth.

Honestly, many character’s actions are questionable at best. Decisions made by Rinko’s bosses at work don’t seem to be made with any sort of common sense. The ladies constant drinking after work would be amusing if they did more than whine and black out every night. There are issues of very questionable consent late in the volume, which left a bit of a bad taste in my mouth. The caveat, of course, is that this is the entire point. This manga and I simply didn’t fit quite as well as I expected. However, there were some aspects I really enjoyed.

I really loved the talking food which appear in the manga. These two anthropomorphic creatures usually appear when Rinko drinks too much and begins to get inside her own head. They speak to her, repeating her fears, desires, and what-ifs. They’re a wonderful touch, and I couldn’t help but be reminded of the talking kitchen appliances from Welcome to the NHK. These function in much of the same fashion, and really drive home just what sort of mental head-space Rinko is in. Elements such as this really carried the volume.

This is a good manga overall, and one which I might continue with. Even so, it frustrated me immensely in certain places. Other manga and light novels with similar unreliable narrators who are self-defeating usually have one thing that makes me root for them – they’re overall nice people, people who mean well even if they don’t always show it outwardly, or else sympathetic in some manner. Certain things Rinko says and does makes her come across as mean and self-centered, making her less likable than she could have been. She hit an odd note with me – not sympathetic enough to feel immediate empathy for, but not enough personality traits in the other direction as to make Rinko so unlikable that you read on just to see what happens next. It hit an odd sort of middle space, and I wasn’t sure if I should be rooting for or against her antics.

As for the art, it is gorgeous. I have always love Akiko Higashimura’s art, and Tokyo Tarareba Girls is certainly no exception. The characters are pretty, the backgrounds are detailed, and I really enjoyed the artistic aspect of the manga. Her art is iconic. It isn’t mistakable for any other art. And I would buy this manga simply for this.

In all, Tokyo Tarareba Girls by Akiko Higashimura is a manga with a solid premise. If you like contemporary manga and characters with unreliable narration this is something you’ll want to pick up. I’m unsure if I’ll be continuing with this series, but I may read further volumes at some point.