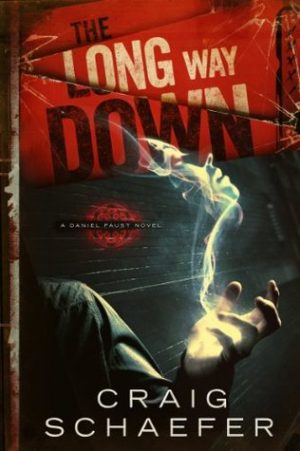 
I feel like I should open this review like what you see at an AA meeting. “Hi, my name is Brittney and I am addicted to Craig Schaefer novels.”

So, now that I’ve got that out of the way and finished all the Harmony Black books that are currently available I decided to go back to where it all began, the Daniel Faust series. And boy oh boy was I in for a treat.

If you’ve seen the books I review you know that one other series that focuses on magic which I am obsessed with is the Harry Dresden books by Jim Butcher. This gave me a good groundwork for Daniel Faust. He was a bit darker, a bit more “devil may care” and definitely a bit looser in his morality than Dresden is but that was just fine with me. Faust is powerful, strong, determined and entertaining. Just what I want from a magical leading man.

So, let’s look at the other reasons I am obsessed with this series now too.

Aside from Faust being very much like Harry Dresden who I adore as well he is flawed. So flawed, so frustratingly flawed in fact that he seems believable. Similarly his relationships with his friends have layers. Yes, layers. His adopted family/friend circle isn’t just “hey we’re all sorcerers or in the occult world so let’s be friends.”

Faust has history with them, each of them and it’s individualized. Even where it would’ve been simple to lump people together Schaefer avoided it. Corman and Bently, the wizards who took in Faust after he was abused and mistreated for years, a badass older gay couple, would’ve been easy to lump together as “hey, they’re my dads.” Instead Faust’s relationship with each is different and Corman and Bently are different from each other as well. Their skills, mannerisms and outlook vary which gives Faust many ways of looking at the tough situations he finds himself in. And this variation is found with each character.

Speaking of variation and complex relationships I’m completely happy with the Daniel/Caitlin scenario, okay? Yes, he is a mortal sorcerer who doesn’t always say or do the right thing and she is an incarnate demon but ya know what? It works. Their banter, their flirtation, their tension sells me on this relationship. Officially this is my OTP of the series (besides Corman and Bently).

Also, the writing walks that fine line between being grim and humorous, balancing the two easily so nothing feels forced. The group of friends can be talking about something serious but still there is an undercurrent of connectivity, camaraderie and, for lack of a better term, taking the piss out of each other. They tease, they gripe, they mumble behind each other’s backs but in the end they are a family of sorts and it’s the dynamic there that lets the story be dark when it needs to be and funny when it needs to be.