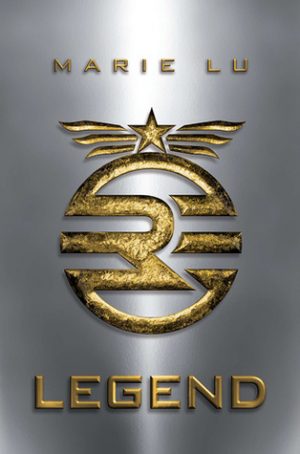 
I freely admit that sometimes I try to avoid new series. Not because I don’t love series (let’s face it, I adore series) but sometimes you aren’t ready to commit to a new series just yet. Every time I’d gone into Barnes and Noble I’d look at Legend by Marie Lu. I’d read the book jacket, the quotes from the New York Times review and other authors and I’d read a few lines on the first page. I just couldn’t commit to the series yet.

The fact is, I’m mad I waited to read this series! I know I’m a bit behind in joining the Legend fandom and if you’re waiting to join in and read the series please don’t wait much longer.

I know that this may not be everyone’s “cup of tea” but it sure is mine. It may not be my favorite book ever but I have to give credit where it is due—the main characters are intriguing, the world is well built and the plot keeps you turning the pages.

I enjoyed the different POVs but while, at times, their voices were similar, I enjoyed seeing things through Day’s eyes and through June’s eyes.
The story centers on the fact that June is a Republic soldier and Day is a rebellious figure within society. When June’s brother is killed, and Day is the suspect, June is sent undercover to find and capture Day. Instead, she finds a lot more than she could have ever expected when she meets Day. The fact is, this is a classic “be careful what you wish for” scenario as, when June finds and helps capture Day, the truth surrounding her brother’s death is nothing like she had been lead to believe.