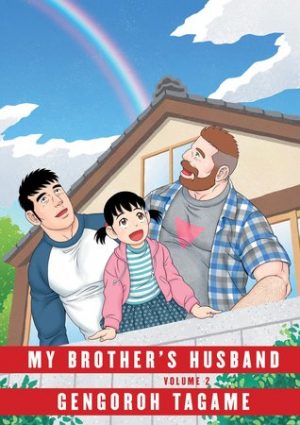 
If there is any manga whose release date I’ve been looking forward to it would be My Brother’s Husband Vol 2 by Gengoroh Tagame. I was so ecstatic when a review copy was sent that I read the whole thing cover to cover as soon as I pulled it out of the packaging. My Brother’s Husband is a story about family, loss, grief, guilt, and acceptance. It is a story we can all relate to in our own ways, and it is a story that demands to be read.

My Brother’s Husband Vol 2 continues the story of Mike, Yaichi, and Kana. Plot in a nutshell – Yaichi’s divorced and his somewhat estranged brother recently deceased. One day Mike, a Canadian man and his brother’s widow, shows up on his doorstep looking to connect with the family he never knew.

The story is quiet and very much a slice-of-life. We follow the family around – mainly Yaichi and Mike – over the course of Mike’s visit. The majority of the story is told Yaichi’s point of view. The change in Yaichi’s viewpoint is subtle at times, but much starker at others. We are privy to his internal musings – the regrets he has over losing his brother, not talking as much as they should have, and not knowing his brother-in-law at all. Those unfamiliar to manga might initially have trouble in or two spots where the dialogue box changes shape and two conversations are ongoing at one – one which depicts Yaichi’s inner thoughts and what he wants to say versus what is actually said in the ongoing conversation. But these internal discussions are quite wonderful and I enjoyed them immensely.

Kana, Yaichi’s daughter, is adorable, excitable, and sometimes instigates plot developments. She really felt like a little kid, something that was missing from several of my other recent reads, and I really grew to love her character. There is a way she brings people together, a way her love just infects everyone. Even when the adults sometimes fear things might be somehow awkward or strange, Kana never does. There is something we can all take away in that, I think. Something that often gets lost in the shuffle, something we know but don’t really take to heart.

This manga is powerful, and Togame’s prowess within the genre shines through every page. More is said within two panels depicting Yaichi staring at the empty futon with only the slow, steady tick of the clock in the background than any amount of dialogue could ever convey. This manga sneaks up you, steals your heart away and refuses to return it.

So many things are memorable. So many things tug on your heartstrings when you least expect them to. When Yaichi stood up to Kana’s homeroom teacher, telling him in no uncertain terms that instead of silencing Kana and trying to get her to stop talking about an uncle who’s gay since it could be a source of bullying, he should be making sure that those bullies don’t arise. That was a great scene. You know what also hit hard? When Yaichi’s ex-wife turned to him and stated unequivocally that they were family, even if they weren’t exactly like other families, even if they were divorced and had lost parents and siblings, even if strangers misinterpreted their relationships. These are scenes that don’t get out of your head. They remain, quiet and contemplative, much like Yaichi himself.

This is a story of people dealing with grief and guilt over the past. It is dealt with in broad strokes – Yaichi’s internal contemplations, for example. But it is dealt with in quieter ways that aren’t always verbally discussed, nor are such cut and dry answers or healing reached. They try, though. But things remain that still cause too much pain – Mike’s inability to make a strong promise to Kana, because he wasn’t able to keep his promise to his husband through no fault of his own. The guilt that it was Yaichi’s own fault he never saw his brother after he’d moved away. They are dealt with, they are discussed if briefly, but they aren’t gone, not really. They are wounds that are carried, and, ever so slowly, begin to fade. What scars do we carry? How much do we ever really ‘get over’ the death of a loved one? Can lost time be made up, and can we atone for things we’ve said or never said?

The volume closes out on a bittersweet note. Mike must return to Canada, after all, and the time has come. Yaichi, Mike, all of them have grown in different ways. They’re not the same people they were when the story started. Leaving is hard, as much for the characters as for the reader. (Few things make me cry ugly tears. This did.)

I would absolutely recommend reading this series. It’s gentle. It’s sweet. It’s heartbreaking. My Brother’s Husband Vol 2 by Gengoroh Tagame lives up to the first volume in every way. Find a copy. Read it. It will absolutely not disappoint.