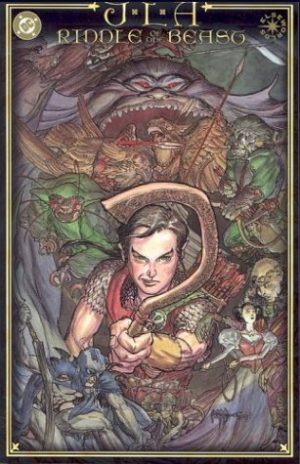 
I knew nothing about this graphic novel when I picked it up at the library. All I knew was that it was a fantasy story and I liked the art when I was flipping through it. That was certainly enough for me, and I’m happy I took a chance on this title. JLA: Riddle of the Beast is written by Alan Grant with art by Michael Wm. Kaluta, Carl Critchlow, Simon Davis,s Glenn Fabry, Jon Foster, Rafa Garres, D. Alexander Gregory, Alex Horley, Kenny Lopez, Liam R. McCormack-Sharp, Hermann Mejia, Jim Murray, Andrew Robinson, Greg Staples, Saverio Tenuta, John Watson, and Martin T. William.

This is a re-imagining of the Justice League. In this version, the world is a fantasy world one with a very tentative peace after years of war. Now the monsters have returned, and it is up to a young man named Robin to save the world and fight off this evil once and for all.

Familiar faces make appearances throughout the graphic novel. Names are largely the same, with character design and background changed to fit a high fantasy setting. Batman’s character design and background I especially loved. That said, you will get the most out of this graphic novel if you are already familiar with the Justice League and DC characters. It will also help if you are familiar with how high fantasy stories generally play out.

The story is a quick read. Maybe a little too quick. Another one or two graphic novels could have been used to really flesh out the story and explore the many characters who drift in and out of the story. Yet, in a lot of ways, it’s just fine as it is.

The thing this most closely resembles is fanfiction, and I say that with the utmost love. It is something often seen in the realms of fanfiction – take familiar characters, change the setting, use common, familiar tropes and craft a fun, exciting story around them. And very well crafted, officially recognized fanfiction is more or less what this is. If you enjoy fanfiction, I would highly recommend reading this graphic novel. It is a truly fun read.

The art was, by and large, wonderful. I didn’t enjoy every panel. Some styles weren’t exactly my cup of tea. But overall the art really worked to the stories advantage. Color pallets changed depending on the location and characters shown. The bright orange and yellow flames that surround the villains jump off the page. The human cities dark, depressing gray and blue tones are subdued and have an air of sadness about them.

In all, I would suggest giving JLA: Riddle of the Beast a read if you like the justice league and high fantasy stories. As a standalone graphic novel its easy to get into and doesn’t require as much commitment as other superhero series. It’s short. It’s fun. And I’m glad I picked it up.