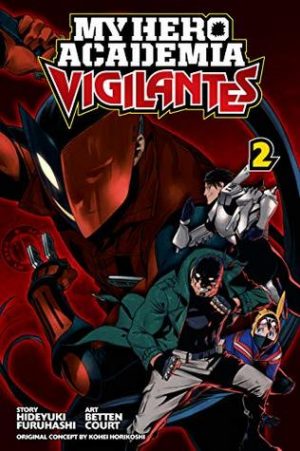 
October 2nd saw the release of My Hero Academia: Vigilantes Vol. 2 by Hideyuki Furuhashi and Betten Court. This volume explores the quirk based society from the eyes of a vigilante hero while continuing with themes and questions presented both in the first volume and the series proper.

If you want to catch up with our reviews of this series you can find what we thought of My Hero Academia: Vigilantes Vol. 1 here.

For those who don’t know, this is a spinoff series of My Hero Academia set several years before the main series’ beginnings. The main character here is Koichi, a young man who calls himself The Crawler and is a vigilante hero. Volume 2 continues with Koichi, Knuckleduster, and Pop Step searching for the origins of the drug Trigger and defeated the small-time villains pro heroes either can’t or won’t capture.

This volume sees some familiar faces from the main series while simultaneously standing very strongly as a series in its own right. Themes of justice versus bloodthirstiness are explored. We see again the rough edge between Knuckleduster’s generation and the younger generation of Koichi and Pop Step. And, of course, the ever ringing question what truly makes a hero.

The pacing in this volume is very steady. There are a lot of fight scenes showing both the vigilantes and pro hero agencies attempts at capturing villains. Never does the pacing feel too fast. The quickly paced, exciting battles are tempered with quieter moments between characters at Koichi’s house and around town. Character development is plentiful within these scenes. A brief glimpse is given into both Koichi and Pop Step’s pasts. Koichi makes friends with a certain pro hero, and more.

Villains new and old are introduced in this volume. We see what the Trigger suppliers are up to, and what the vigilante crew is doing to address the issue and keep the city safe the only way they can. Yet, mostly, this is another volume that shows the daily life of Koichi and his actions as a vigilante who takes care of the villains who slip through the cracks and the trash that aren’t big enough or don’t use their quirks enough to truly bear the title of villain.

This volume is chock full of nods to the series proper. These are incorporated in the best, most fluid feeling of ways. Nothing feels forced and the facts presented here don’t contradict what we already know of these characters. What we get is a true glimpse into their origins, especially in the second half of the volume. We see a character change before our eyes, and become that which we know. This is where we see several characters in stark contrast against one another. Koichi’s capture-only and friendly chat with the bad guy’s ways are shown in rather direct contrast to Knuckleduster’s punch first and question later mentality. Both of these versions of justice are shown in contrast with the bloodthirsty, vengeful tactics of a newly introduced character.

Pop Step and Koichi’s cleverness really shine in a few places within this volume. Being able to take down villains, securely capture them, and leave before the police or pro heroes show up is cause enough to salute them. Again, we see them manipulating the crowds with Pop Steps fame and the powers of social media. I really like seeing this aspect of the vigilante crew. As vigilantes, they have an obviously smaller pool of resources than their liscenced counterparts. The cleverness with which they use the everyday things around them shows just how resourceful they are and how things like social media and viral posts can have the potential to have very real world effects.

My Hero Academia: Vigilantes Vol. 2 by Hideyuki Furuhashi and Betten Court is a fantastic second volume in the series and provides a unique view on the world of My Hero Academia. This is definitely a series I will be continuing with in the future.