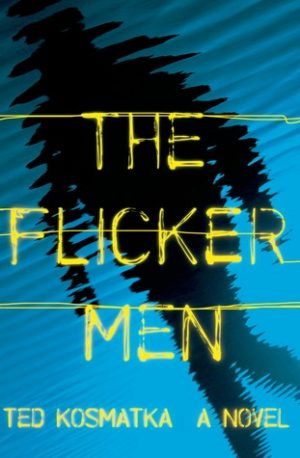 
The Flicker Men by Ted Kosmatka is a fast paced science fiction thriller about a washed-up scientist with a serious drinking problem who suffers from depression and has a family history of suicide and mental instability. When an old friend presents Eric with a second chance and research position, he takes it. The job comes with a stipulation, though – produce some kind of results within three months – and Eric has no ambitions of trying to meet this. When the unthinkable happens and his easy, safe reproduction of the double-helix experiment produces new results not everyone is happy with him.

Our narrator is Eric Argus, a wonderfully flawed individual who felt incredibly real. Childhood traumas that were never properly dealt with haunt him, and Eric has very real issues with drinking and suffers from depression. He makes mistakes, and can often be considered a rather unreliable narrator. Even Eric questions his own mental state, especially as more explainable events begin to occur around him. Throughout the story, Eric changes. His vices and downfalls aren’t completely overcome, but the effort is made both consciously and unconsciously.

A fair number of secondary characters existed within the novel as well. The majority of these were Eric’s fellow scientists, some of whom were assisting with the double-helix experiments, and others who simply worked in the same building. The scientists were all very lovable, bursting with personality and quirks. While memorable and bursting with personality, they weren’t always allowed the time to be as rounded as they could be.

The Flicker Men delves into some hardcore science. Quantum physics isn’t anything to sneeze at, and the double-slit experiment is very central to the plot. Yet, the science-heavy sections were never confusing or overwhelming. and I never got bogged down in trying to decipher the science behind the story. Everything you need to know is relayed by the author, and done so rather deftly well. The story never stops to dump all the info on the reader. Instead, everything is relayed rather naturally through conversations between Eric and his fellow scientists, many of whom are not physicists themselves, and on an as-needed basis.

At the end of the day I absolutely recommend reading The Flicker Men by Ted Kosmatka. If you are a fan of thrillers and don’t read a lot of science fiction, this would be a great place to start.