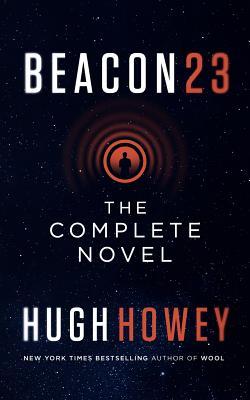 
So, I’ve had a Kindle for years. Somehow, I missed that you could check out a book from the Amazon store as a library book. Once I figured out that (a) this was a thing and (b) how to do it, I borrowed Beacon 23: The Complete Novel by Hugh Howey. Despite actually owning his first novel, Wool, this is the first of his books I’ve read. (I know, I know. I’m a serial tbr pile neglector.)

Originally published in five parts, this edition compiles the entirety into one novel. Beacon 23 is a story about a former military officer called Digger now working the very lonely position of beacon operator. All alone in a largely uninhabited part of the galaxy, he works a ‘lighthouse’ – a space station whose sole purpose is to warn and guide incoming vessels of the very large, very dangerous nearby asteroid field.

Each section tells a rather cohesive story from the eyes of Digger. Various mishaps occur aboard the beacon, mishaps that must be dealt with alone no matter the difficulty because there is no help to call so far out in space. In between his duties, Digger attempts to deal with the horrors of war and being the only one of his squadron to survive.

I really enjoyed reading from Digger’s point of view. He is a very haunted person, one searching for answers to questions that don’t necessarily have any. Yet, Digger isn’t entirely alone, at least not all the time. A small but steady stream of secondary characters make their way through the pages. Some are real. Some are possibly imagined. All make an impact on Digger.

Parts 1 to 3 were quite fun. The tone was at once humorous and unsettling. Funny sections are blended seamlessly into truly unsettling sections as Digger loses his grasp on and struggles to regain sanity. Part 4 sees the introduction of another beacon operator who’s stationed nearby and becomes a possible love interest. The tone shifts in Part 5. Similar story beats and tones are carried through, but it is obvious that Digger’s narration is more unreliable than ever as his mental health deteriorates.

Overall, I quite enjoyed Beacon 23: The Complete Novel by Hugh Howey. It was an interesting concept with a memorable, unreliable narrator. I’ll definitely be moving the rest of Howey’s books higher up on the to-be-read pile.