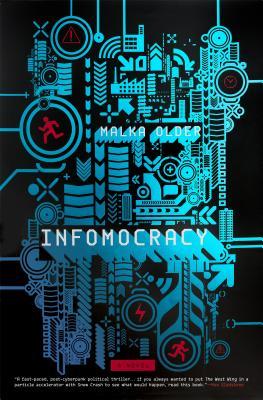 
Malka Older’s debut novel Infomocracy is a brilliantly written story of political intrigue set in the near future. Every ten years sees a world-wide election. Instead of individuals competing for leadership, it is political bodies with vastly differing ideologies. Whichever government will win the most votes will take the coveted position of Supermajority. Above all of this is Information, a global corporation providing information about everything and everything. But this governmental system is fairly new, the election filled with contention, and things quickly go from bad to worse.

Infomocracy is, quite honestly, one of the best books I’ve read thus far this year. It hit a lot of the right buttons for me, and I’d re-read it in a heartbeat. One of the things that stood out for me? The characters.

There are a lot of characters who weave in and out of the narrative, but the two main characters are Ken, who works for one of the govermental bodies up for election, and Mishima, who works for Information. Despite the sheer number of characters introduced, all of them are memorable, play unique roles in the tale at hand, and and speak in distinctive voices. The cast reflects the near-future world they live in very accurately. The cast is very international with multiple characters being bi-racial, immigrants, and having immigrant parents. Travel between countries is very frequent, and, even with speech being able to be translated automatically by device, characters often speak multiple languages.

The first few chapters set up the world, characters, and presents issues looming the background which are then brought to the forefront and consists most of the conflict for the rest of the novel. The slow introduction of setting and character explodes to life – literally – sending the plot hurtling right along for the rest of the novel. Complex relationships are built between characters. Romance is there too, though it is never the sole focus of the book. However, what romance there is occurs very naturally.

Though Infomocracy by Malka Older is the first book in a series, it stands very strongly on its own with a thoroughly satisfying conclusion. If you’re someone who doesn’t enjoy cliffhangers or prefers standalone novels, rest assured that this book will scratch the same itch. I highly recommend this book.