Review – Cure for the Common Universe by Christian McKay Heidicker 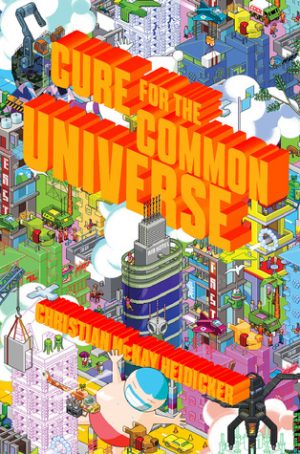 
I stumbled upon Cure for the Common Universe by Christian McKay Heidicker completely on accident, and boy am I happy I did. I was at the bookstore and there it was – all bright reds and oranges popping off a background of blues and greens and whites. It even had an interesting sounding title. So I put it on top of my already too-big stack of books and wanted to love it instantly. And boy howdy, I was not disappointed.

Our main character is Jaxon, or Miles, as he’s known to his fellow rehab-mates. He’s a bit overweight, prefers video games to nearly all other pastimes, and just wants to go on a date with a pretty girl he met at the car wash. The problem? He’s been sent to a rehab center for video game addicts, the very first of its kind. Miles has only one goal – to get as many points as possible and leave the newly opened video game rehab center by Thursday afternoon so he can make his date with the very pretty, definitely completely normal girl he met at the car wash.

The entire story is told from Miles’s point of view. He’s a somewhat unreliable narrator. More than that, he acts very much like a teenager. Miles has his own set of problems – he’s not sent to rehab for no reason, after all. While trying to navigate the rules, regulations, and social aspects of the rehab center, Miles makes mistakes. He fumbles. Sometimes he makes the wrong choices, all in a very believable way while making the reader still want to root for him.

As a gamer, there were plenty of little asides and references to video games and gaming culture I enjoyed. None of these references were so obscure as to shut out either casual gamers or those who’ve never picked up a controller. The rehab center’s methodology was quite interested. Pandering a gamer’s senses, they decided to make recovery points based. Eat a healthy meal, participate in group activities, ect., will grant you points and level you. The more points gained means more levels gained and the quicker you go home.

As you can imagine, basing a rehab center on mechanics involved in the very thing these teenagers are in rehab for has a high chance of being played or backfiring entirely. Miles plays heavily on this, planning his strategy to be released very carefully, but at the expense of those around him.

The ending of the book is very realistic. As it so often is in life, things aren’t picture perfect. But they are hopeful. Things don’t fall happily into place quite as easily as they do in the video games he loves – not for Miles, and not for the other characters, either. But Miles changes. He learns. He’s a very real character with some rather serious flaws. And while he might not be a completely reformed person, Miles has found something more important than that – the ambition to be a different and better version of himself, and to fix the relationships he’s shattered.

Cure for the Common Universe is a wonderful debut title from Christian McKay Heidicker. I devoured this novel, and look forward to Heidicker’s next work. It was a truly great read. If you love video games or young adult books you’ll definitely want to check this one out