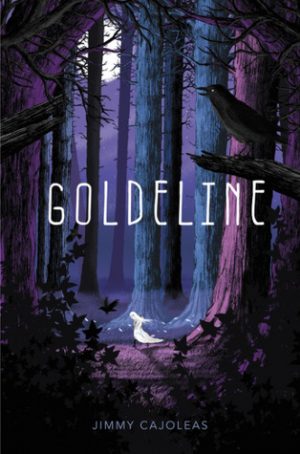 
Goldeline by Jimmy Cajoleas is a story of found family, magic, and memory. It is a middle grade novel I would have adored as a child, and one I devoured as an adult. If you’ve been sitting on this, I urge you to read it immediately.

Our protagonist is Goldeline, a girl who lives with a group of bandits hiding in the woods that surround a small town. When Goldeline finds a young boy hiding fear during a raid, she helps him, hiding him in the woods. This is dangerous, a bad idea to be sure, and one with extensive repercussions. Now she is being hunted by the same man who killed her mother, a witch and healer. But the magic The Preacher is so determined to stamp out may be the very thing that will save her.

This is a book about a lot of things – magic, family, revenge, good versus evil, and the murky space in between. But mostly it is a book about Goldeline, a girl who has watched her mother’s murder and who is still running, hiding, from a man who will never stop hunting her. It is told from Goldeline’s point of view in first person present tense narration that brings a sense of urgency and immediacy to the narrative.

The magic in this book isn’t the sort of all powerful wizardry of high fantasy. It is a slow, creeping thing, the sort of magic that is caught out of the corner of your eye or found in woods that are too deep and too old. This is fairy tale magic in the truest of senses. Moreover, it is seen through the eyes of a child. Magic is something unexplainable, a thing that was never quite taught to Goldeline, but something which surrounds Goldeline and is a very important part of her being.

“This is how you do magic, I realize. You read the stories in everything, you speak the stories of the world.”

Yet, magic is also the very thing that haunts her. It is because of her mother, her mother’s magic, and her own magic that she is being hunted by The Preacher. This is an important concept at the core of this novel. The dual nature of thing and the way the same thing can be viewed so incredibly differently through different eyes or at different points in one’s life is at the very heart of this story. Magic can both be a saving, healing force and something that is feared and despised. The inn Gruff tells Goldeline stories about is both a fantastical, wonderful place where she will always be fed, warm, and happy, but also is just another inn. The forest is a safe place that provides both food and shelter, but it is also a place filled with potential hazards, unfriendly magic, and people harboring selfish motives.

There is much discussion here about family and good versus evil. Unlike many other middle grade stories, this isn’t always a black versus white issue. The lines aren’t clear cut, instead being a murky gray mess. The Preacher, of course, is a dark, evil man. The bandits, on the other hand, are people on whom we must cast our own judgement. To Goldeline, they are her family, her saviors – the only ones who bothered to care for her and take her in when her entire world was shattered. To Tommy, they are cold, cruel, and villainous – the people who attacked him and left those he was traveling with for dead. Both of these views are true. So what are they? Good? Evil? Simply human?

Goldeline by Jimmy Cajoleas is at once a story perfect for middle grade readers, and one that isn’t afraid to question and make a reader think. It’s a story people of all ages can enjoy. And it is one I wholeheartedly encourage you to read.