#MangaMonday Review – Dragon Ball: That Time I Got Reincarnated as Yamcha by Dragongarow Lee 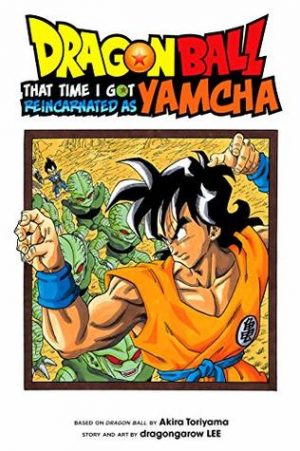 
Every once in a while something magical happens. Sometimes we’re blessed with fanfiction that gets sanctioned by the series. Sometimes, we get manga like this. Dragon Ball: The Time I Got Reincarnated as Yamcha is by Dragongarow Lee, a fan artist who is well known in the community.

The story revolves around a high schooler who falls to his death and finds himself reincarnated as Yamcha. As a super fan of the Dragon Ball series, this is great! Except, Yamcha dies within the original story, and he isn’t very keen on that happening. The goal? Make sure that things do not go as written.

If you think the plot sounds like a fanfiction, well, that’s because it is. And you know what? I really love fanfiction. The tropes found in the chaotic halls of FanFiction.Net (not that that dates me) and AO3 are ones just as much as the ones found in manga and novels. Here, it works. It does what it sets out to. Add fun additional content and some good fights to Dragon Ball.

There will, no doubt, be things people don’t like about this. In general, if you aren’t a fan of Dragon Ball, and have no patience for fanfiction and anime/manga tropes, this is something you won’t get too much mileage out of. That’s okay. If, like me, you like at least one of these things, this is a quick manga that’s the prefect length to read on the commute to work or school.

Dragongarow Lee is a very well-known doujinshi for a reason. The art found here is great. It really does look like Toriyama’s artwork. Very little, if any, liberties were taken in regards to things like character design. Fights were well drawn, and panel layout flowed very naturally.

The majority of the story takes place within the Dragon Ball universe. Our own world is only featured long enough to set up the story and main character. The story begins within Dragon Ball and goes a fair way into the time line. Though background on what time and place the main character is in are clearly conveyed, those who read the original manga or watched the anime would probably find following the story easier – at least from a timeline standpoint.

The manga is only three chapters long, and easy to get through. It never lingers too long, or overstays its welcome. It does what it wants quickly, throwing in some very good fights and a bit of a twist at the end. If anything, I wanted it to be longer. I’d have loved to linger over longer battles. But, that’s what the original series is for, and there’s certainly enough volumes of that.

Overall, Dragon Ball: That Time I Got Reincarnated as Yamcha by Dragongarow Lee was a fun one-shot manga that’s perfect for Dragon Ball fans with a penchant for isekai. If this sounds like something up your alley, I’d encourage you to give it a shot.