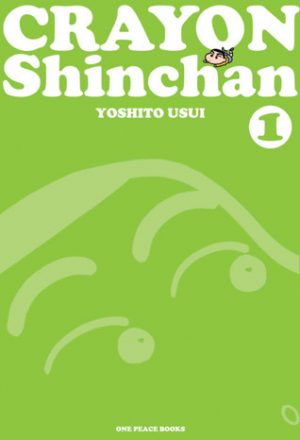 
Crayon Shinchan is a very long running anime in Japan which had a shorter run in the US. It’s also an anime I’ve watched over and over again. When I saw the Crayon Shinchan, Volume 1 by Yoshito Usui was available to read on Scribd, I jumped on it.

This particular edition can be found in a 360 page omnibus. However, it reads quite quickly as each scene is broken down into only two or three pages and grouped into somewhat themed chapters. The story never lingers too long, something which can be very beneficial in humor. Here, it works extremely well, giving just enough time to convey everything, but not so long that readers get as annoyed with Shin as his mother, Mitzi, does.

The manga is a humorous look at domestic life in modern times. There is no large, overarching story, instead having a more slice-of-life feel. Most of the stories feature Shin heavily, usually as a catalyst for whatever goes horribly awry in any given skit. Sometimes, Shin is merely being a kindergartner who says the wrong thing at the wrong time and makes things awkward for his parents simply because he’s so young. Other times, Shin’s lewdness or crassness takes the stage. Either way, it made me laugh and flip the page to find the next short story.

Now, as with all humor, this manga has the potential to be rather hit or miss. If you like the comedy style, you’ll dive right in. If not, this isn’t going to be the manga for you. Shin is crass, lewd, and would probably fit right in with the cast of South Park if he was in 4th grade instead of kindergarten. Shin can be a lot to handle, something his parents and teachers know all too well.

If you’ve watched the anime – at least what’s available in English – do be aware that some of the character names were changed for the dub. This isn’t an issue in any way as it’s easy to determine who is who, but it is something to keep in mind as unfamiliar names will appear.

The art here shows its age, being easily identifiable as something from the 80s-90s era. It’s more ‘cartoonish’ than some other manga, with a lack of a shading and intricate details. Backgrounds are normally rather filled in and those that are not tend to reflect the real-life location – for example, a blank bathroom wall, etc. Characters have very vivid expressions and are generally easy to tell apart from one another.

I have always enjoyed the Crayon Shinchan anime, and am quite pleased to say that I enjoyed the manga as well. If you are looking for a humorous slice-of-life manga, check out Crayon Shinchan, Volume 1 by Yoshito Usui. That said, if you don’t like humor that can venture towards the crass at times, you might want to check a copy out at the library first.