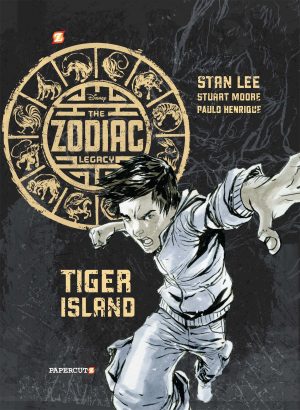 
The Zodiac Legacy #1 is a graphic novel by Stuart Moore, Stan Lee, and P. H. Marcondes based on a series of young adult novels of the same title. This is the first in a series of graphic novels involving characters with superpowers based on the Chinese zodiac.

Coming from the world of manga, it was a very nice change of pace to have all-color pages. The art style itself was nice, though I couldn’t help but think that some of the panels were a bit too static. The beginning of the volume had a lot of talking and very little action. More action does happen towards the middle and end of the volume, making for more exciting and stylized panels.

Overall this graphic novel was good, and the series has a lot of promise. However, I feel like it let a major opportunity slip through its fingers. The entire backstory of how the characters received their powers is told in a flashback from the antagonist’s point of view. This is due, no doubt, to the graphic novel being based on an already established novel series, and the creators wanting to skip the need to rehash previous world building. While this is understandable it does mean new readers don’t have a very clear picture of the protagonists, setting, and backstory which can make some of the later plot points in this volume hit much less hard than they are intended since we aren’t as invested in the characters.

Overall, this didn’t feel like the first volume in a series, but more like the second or third. Still, it hits a lot of high notes as well. Steven, our protagonist follows a rather typical shonen protagonist path, and if there’s anything that can grab my attention its shonen manga. If you are a fan of the novel series or shonen manga you’ll probably find a lot to like here.

The Zodiac Legacy #1 has a very interesting concept and tons of yet untapped potential. During the wait for volume 2 I’ll be seeking out the original novel series.