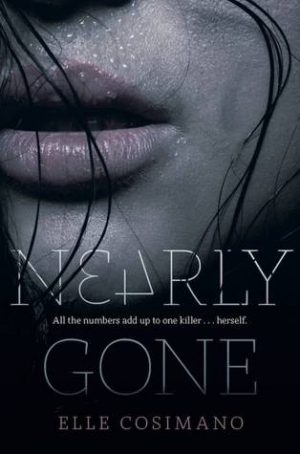 
What draws you to a book? Is it the cover artwork? The title? The cover tagline? The synopsis on the back of the book? For me this time around it was all to do with the cover. The art was intriguing, showing only a portion of our main character Nearly Boswell’s face and, while her lips are on the cover it isn’t explicitly sensual. I tend to grow tired of the covers with beautiful girls in beautiful clothes in a beautiful scene somewhere. We all know that for most of those books the beautiful, idyllic cover is a lie. This time around, the haunting cover tells you everything you need to know, that nothing is okay and you’re in for an intense ride.

Let me also state that this book has a very Pretty Little Liars feel to it in that teenagers are solving crimes and, in the process, getting themselves into trouble/making matters worse. Now that that’s out of the way let’s talk about the book itself.

A main character with a troubled home life and her own set of secrets isn’t entirely unusual, drama creates interest, right? However this was one of the first time I’d read about someone mixing common scenarios of strife (i.e. a troubled mother, an absentee father) with an unusual condition (the girl can taste/sense people’s emotions). So, add intelligence and a tendency to stick to a small, tight group of friends and you’ve got Nearly Boswell.

First off, I love her name Nearly. She’s named this as she was sick at birth and they “nearly lost her” and her mother, deciding it was important to note that brush with death for every minute of her daughter’s life, made it her name and a permanent icebreaker. Most of the names of the characters I enjoyed (have you ever had that moment where you just don’t like the name for a character/ it doesn’t fit the character for some reason? It didn’t happen to me here which I was grateful for.)

We follow Nearly and her classmates through the serial murders of her classmates and Nearly’s obsession with the personal ads. She’s certain she can find and catch the killer and when Nearly herself falls into the sights of the local police things become truly interesting. She struggles with balancing her changing friendships, vying for a prestigious internship and a budding but not sure if she truly desires it romance.

The only things that keep me from giving this a full five-star review are that I just cannot fully believe some scenarios within the book. Much like Pretty Little Liars I have an issue with how bad the local police are at their jobs and their inability to keeps kids out of secluded areas or solve crimes without the help of said kids. Add to that Reece’s undercover deal to stay out of trouble and the lack of proper parenting on all fronts I struggled to accept certain scenarios. I know these things do happen but we do already have the wow factor in Nearly’s ability to taste emotions, we don’t need an undercover sting operation to sell us on the book any further.

Read Nearly Gone if you want a thriller with lots of twists and turns and if you’re willing to commit to this book and the sequel, Nearly Found.