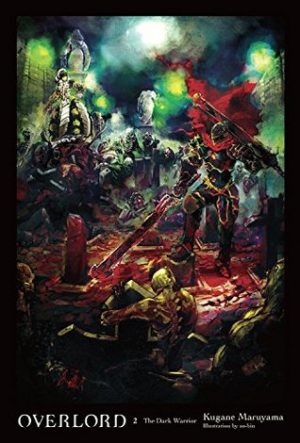 
Every time I go into a bookstore it’s the same. I chant “I just bought books; I will not buy more.” I’m not sure why I bother. It never works. This last trip to the bookstore was my best attempt yet. The last set of books I’d ordered had just arrived at my door that morning and I swore I wasn’t buying more. Then I saw Overlord, Vol. 2: The Dark Warrior sitting on a shelf with some recent manga releases, squee’d, and immediately bought it. Because I’m weak.

Overlord, Vol 2: The Dark Warrior by Kugane Maruyama picks up where Vol 1 leaves off. It’s been a week since Momonga logged into the RPG Yggdrasil for the last time and, along with his guild and its npc’s, was trapped in a world that definitely wasn’t Yggdrasil. Momonga now goes by the name of Ainz Al Gown, once the name of his guild. Trying to find more information on this new world he finds himself in, and trying to build up his own reputation, Ainz goes to the nearby city of E-Rantel, joins the adventurer’s guild, and goes on what would be classified as beginner quests – escort an apothecary as he gathers some plants for potions and kill any low level monsters nearby.

Near the center of the book there is a chapter simply labeled as ‘Intermission’. It’s a very short section featuring some of what’s going on back at The Great Tomb of Nazarick. It’s a short, fun section set in the middle of the novel following some of the characters back at the Tomb of Nazarick.

Some sections of the light novel are a bit slower, taking time to focus on world building and characterization. However, there is also plenty of fast paced action. Fight scenes are exciting, and well detailed. And the last battle in the book is extremely exciting, more than making up for sections that might have felt on the slower side.

A few of the subplots found in the first light novel are put on the backburner in volume 2. Albedo doesn’t feature prominently, and in fact isn’t in this volume almost at all. These, I’m sure, will come into play later in the series, most likely when focus shifts from Ainz and his attempts at mercenary work and learning about the new world he’s found himself in back to the Tomb of Nazarik.

This book saw the introduction of several new characters. Hamusuke is rather endearing. Clementine is completely, utterly insane. The members of the Swords of Darkness were all enjoyable, lovable individuals and had a decent amount of characterization and backstory related rather quickly. The other character I really liked was Nfirea, a teenager confident in some of his abilities and completely insecure in others, and the grandson of a locally famous apothecary, all captured perfectly by Maruyama.

I must applaud Overlord for is its intricate explanation of the world, more specifically how magic and other traits/skills work. While there are a plethora of isekai books the majority don’t ever go into any real detail or explore the magic system quite so thoroughly. Overlord’s world is complex and fully realized. The world feel more real than many, and, as a gamer, is much easier for me to understand than some other explanations of how magic works in other books.

Also worthy of note is the absolutely beautiful artwork by so-bin. Not only is there a full color image at the start of each chapter, but an additional two page image and a foldout at the beginning of the book.

Overlord Vol 2: The Dark Warrior does leave off on a bit of cliffhanger, more so than the first volume, and I’ll definitely be coming back to see what happens next. While there were some issues, largely with pacing, I still found the book highly enjoyable and would recommend anyone who likes high fantasy, manga, or video game related books.